The primary use of ferric chloride is to remove impurities in water and for wastewater treatment. Ferric chloride is also one of the few water treatment chemicals that can sequester odors. Combined with use in industrial water applications and in the pretreatment of seawater prior to desalination, total water treatment accounts for more than three-fourths of total demand globally. Smaller volumes of higher-grade ferric chloride are used as a catalyst in chemical reactions and as an etchant in microelectronics production (printed circuit boards [PCBs]). The PCB market is largely in Asia.

In industrialized regions (United States, Western Europe, and Japan), ferric chloride markets are relatively mature. Although it is recognized as a highly effective flocculant and sequestering agent for sludge and odor control, substitution from competing products will lead to relatively flat demand. In Asia and the Middle East, where economic and population expansion has resulted in greater demand for water management, ferric chloride continues to experience above-average growth. For countries in Central and Eastern Europe, which have mostly completed their compliance with EU regulations since joining the European Union, growth is likely to be slower. Many countries in Latin America have been slow to invest in infrastructure or adopt necessary environmental and health legislation, but this is expected to change as the economies in the region recover from recent recessions. 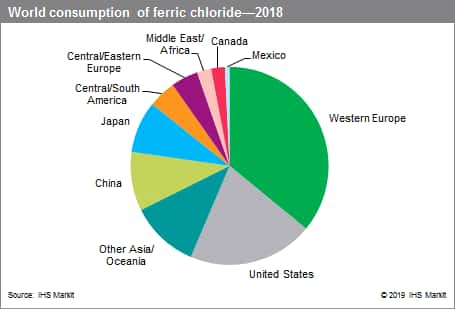 In Western Europe, ferric chloride is used mostly as a coagulant for sewage treatment and potable water production. It is also used as an etchant for copper-based metals in printed circuit boards, a precursor in synthetic iron oxide and specialty pigment production, and in the pharmaceutical industry, where it is used as a precursor for iron-bearing medicine for anemia treatment. Growth in Western Europe is stable, with all countries having installations in place to comply with EU legislation for clean water standards in both the municipal and industrial sectors. In the forecast period, consumption is expected to stagnate, with a largely mature water treatment market.

Water treatment will continue to be the largest end use for ferric chloride in China; wastewater is treated and recycled extensively for industry use and farm irrigation. Although industry wastewater discharge has been decreasing in recent years, the discharge of domestic sewage has been growing rapidly

PCB production is the major use for ferric chloride in most of the rest of Asia, accounting for about half of consumption. China and Other Asia will continue to drive overall global consumption of ferric chloride.

The ferric chloride market is mostly regional; the volume of ferric chloride traded globally is negligible compared with overall market volumes. This is because the product is produced and consumed in the form of an aqueous solution with a typical content of 40% FeCl3. The price of the product, and the fact that it consists of 60% water, makes transportation over larger distances uneconomical. In addition, the raw materials—hydrochloric acid, chlorine, and scrap iron, or pickling acid—are available in most countries of the world, and production technologies and equipment do not have to be very sophisticated.

Global production capacities exceed demand significantly. Nameplate capacities are often larger than regional demand, which allows producers to vary production volumes opportunistically, and as a function of by-product availability and the price of hydrochloric acid. The markets in industrialized countries are mature, whereas demand in developing countries keeps growing with the increasing demand for water treatment, and more stringent regulations for the treatment of industrial wastewater. No new uses for ferric chloride are on the horizon, nor are there other products likely to replace ferric chloride in its main areas of use.