Ethyleneamines are chemicals that contain ethylene (-CH2CH2-) linkages between amine groups; these primary and/or secondary amino groups can react with many chemicals to produce a wide range of chemical products. Ethyleneamines are commercially produced via the monoethanolamine (MEA)/reductive amination (RA) process or the ethylene dichloride (EDC) process and are generally colorless, low-viscosity liquids with a fishy amine odor, although some are solids at room temperature. Although there have been some advancements in end-use markets in terms of chemistry and technology, the functionality requirements of ethyleneamine products have changed very little. 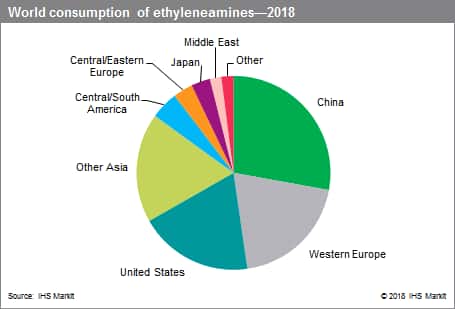 The largest application for ethyleneamines is in the production of polyamide/epoxy resins. EDA is consumed for nonreactive polyamides, while higher ethyleneamines (mainly TETA and tetraethylenepentamine [TEPA]) are consumed for reactive polyamides. Ethyleneamines, primarily the higher amines (DETA, TETA, TEPA, and aminoethylpiperazine [AEP]), can be used directly as curing agents for epoxy resins. Chelating agents are the second-largest market for ethyleneamines, consuming mainly EDA and DETA. Other major applications include lubricants, fungicides, polyamideepichlorohydrin (PAE) wet-strength paper resins, and surfactants/fabric softeners.

The following will have an impact on global growth in consumption of ethyleneamines in various compounds during 2018–23:

Ethyleneamines production is fairly concentrated, with the top six world producers accounting for 85% of the total global capacity in 2018. Most of the capacity is located in East Asia (China and Japan), Western Europe, the United States, and the Middle East. The MEA process now accounts for the majority of world capacity, with the EDC process accounting for the remainder. However, in 2017 Akzo Nobel announced the development of a new EO-based process for making higher ethyleneamines and derivatives. The new process generates high yields of amines including DETA and TETA, while reducing raw material consumption and substantially improving cost and environmental performance compared with existing processes. This new production method may have a significant impact on the industry in the coming years.