Low-density polyethylene (LDPE) resins were introduced in the late 1930s. Over the last 80 years, the classification “lowdensity polyethylene” has grown to encompass several chemically and physically distinct ethylene homopolymer, copolymer, and terpolymer products. Copolymer products are another class of LDPE and include ethylene copolymers with vinyl acetate and other esters or acid groups, which are referred to generally as LDPE copolymers and include identifiable subproduct groupings such as EVA (ethylene–vinyl acetate), ethylene–methyl acrylate (EMA), ethylene–butyl acrylate (EBA), and ethylene–ethyl acrylate (EEA). EVA copolymers are the focus of this report; references are provided to LDPE products, but no detailed analysis is included.

Ethylene–vinyl acetate copolymers are considered specialty polymers, and their overall consumption is predicted to grow at a faster rate than that of LDPE. 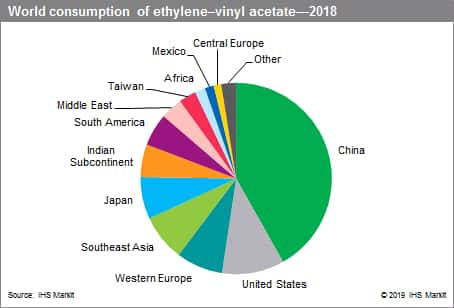 World EVA capacity is projected to increase at an average annual rate of about 5% per year through 2023, while consumption is expected to increase at 4% per year over the same period. New capacity additions in the next five years are predominantly in China, the Middle East, and North America. These capacity additions will be offset by consolidation in regions such as Western Europe and Japan. The top 20 producers accounted for almost 80% of the total global capacity in 2018, with ExxonMobil topping the list. Northeast Asia alone accounts for 57% of global capacity.

Major EVA end uses include adhesives, blow molding, wire and cable manufacturing, film production, foam sheet, extrusion, coextrusion, lamination, coatings, hot-melts, and injection molding. EVAs are also used to modify polymers to improve their flexibility and toughness, and are added to fuel oils to improve cold flow characteristics. Film and sheet applications are the largest-volume markets for EVA, accounting for 55% of world consumption in 2018; they are the major growth markets in countries like China. Film uses of EVA copolymers include food and industrial packaging, surface protection, and agricultural greenhouse films.

One nonpackaging film use for EVA copolymers is in photovoltaic cells and protective solar panel films. EVA sheet in a solar cell module is an essential material because of its two major functions: adhesion to glass, cell, and back sheet, and protection of the cell from moisture and dust. High transparency is a key attribute for photovoltaic cell encapsulation; in order to achieve the optimum performance, the encapsulant material must satisfy several different requirements, including high optical transmittance of incident light; good dielectric properties (electrically insulating); mechanical compliance to protect the solar cells from external mechanical loads and stresses induced by differences in thermal expansion coefficients; good adhesion to both glass and silicon solar cells; and sufficiently robust and low-to-no propensity to leak, separate, thin out, or crack during their economic lives of 20–30 years in the field.

World consumption of EVA copolymers is dominated by Northeast Asia, which accounted for nearly 53% of the total in 2018; by country, consumption was dominated by China, which topped the list at 42% of the global total. Demand is growing at an average annual rate of about 6% in China, much higher than in North America, Japan, and Western Europe, which are forecast to have modest average annual growth, indicative of mature economies with less consumption growth.