Ethylene oxide (EO) is a basic chemical primarily produced by the catalytic oxidation of ethylene. EO is a chemical intermediate that cannot be directly used and is further reacted to produce a wide spectrum of products. Ethylene glycols (mono-, di-, triethylene glycol) constitute by far the single/largest outlet for ethylene oxide, accounting for about 73% of the EO market in 2018. Other dominant end uses include higher-value derivatives such as ethoxylates, ethanolamines, glycol ethers, polyethylene glycol, and polyether polyols. 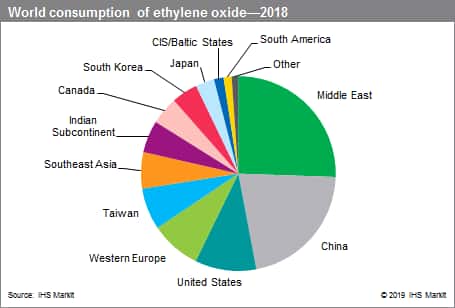 A significant portion of EO producers are forward/integrated into ethylene glycols (EG) production and the most cost/ competitive producers are also backward integrated into the production of ethylene. The production of non-ethylene glycol EO derivatives (ethoxylates, ethanolamines, glycol ethers, polyether polyols, etc.) requires the further purification of EO to produce high/purity EO (HPEO). The share of EO diverted to non-glycol derivatives can significantly vary by region but has broadly gained momentum where producers were no longer able to compete on the highly commoditized MEG market (Western Europe or the United States up until the late 2000s, for instance). Merchant ethylene oxide is primarily found under the high-purity form (HPEO) and is essentially traded within the region where it is produced, as it cannot be easily transported.

As of 2018, EO is primarily produced in Northeast Asia, the Middle East, and North America. In these three regions, a high proportion of producers are forward/integrated into the production of MEG and the EO consumption pattern is therefore broadly similar to the MEG production footprint globally. Over the last two decades, EO production has grown at a fast pace in Northeast Asia, owing to capacity developments in China to serve the growing MEG market.

The Middle East had been quite active between 2005 and 2010, adding about 3.4 million metric tons of new EO capacity. The region had been capitalizing on the availability of extremely cheap ethane to competitively produce ethylene and downstream ethylene derivatives, including ethylene oxide. But the pace of new additions has now slowed in this region, with new capacity clearly shifting to North America.

The primary hazard associated with EO is its high flammability. EO has a flash point of less than -18°G(0°F). EO vapor in the air has very low ignition energy (0.06 mJ) and is therefore prone to static or other low/energy ignition sources. It is heavier than air and can travel long distances to an ignition source. Solutions in water can remain flammable down to a dilution ratio of 100:1 (water-to-EO by volume) in a closed system and 22:1 in an open system. EO is highly reactive with caustics, acids, certain metals and many other chemicals and can decompose explosively.

Overall demand for ethylene oxide is broadly tied to the general economy and has been increasingly linked to emerging countries, where improvements in living standards are driving an increasing usage of a broad spectrum of polymers and chemicals that are further used in the production of packaging, films, textile fibers, soaps, detergents, etc.

Similar to all other petrochemicals, the ethylene oxide industry is cyclical, with the equilibrium between supply and demand driving the state of the industry. In times of large concomitant new capacity commissioning, operating rates generally go down and margins contract because of increased competition among producers. As margins remain under pressure, no new capacity is built (trough conditions). When demand gradually catches up with production, operating rates firm up and margins will expand. This is when the next wave of capacity is generally planned, and the next cycle begins. Peak conditions were prominent within the ethylene oxide industry between 2011 and 2015<, but the industry is currently facing five years of projected oversupply, which will inevitably put pressure on operating rates.