The rapid growth of the PET market (solid-state polyester resin, polyester fibers, and polyester film) triggered a rapid rise in MEG consumption, and new capacities have been started up to serve this growing market. The share of MEG used to produce PET has grown significantly over the past three decades. Antifreeze is the second-largest application for MEG, but the market is significantly smaller (6% of the total in 2021) than that for PET. MEG consumption in antifreeze is impacted by automobile production, weather conditions, and substitution by other products. 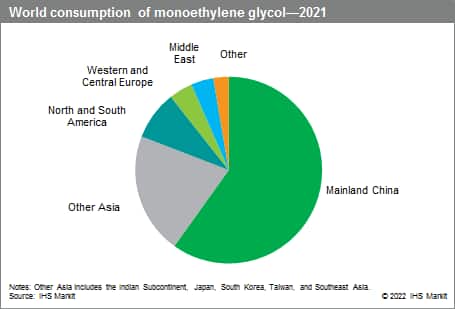 Over the last 15 years, new monoethylene glycol (MEG) capacities have started up in cost-advantaged regions (Middle East) or where demand has been booming (Northeast Asia), while other regions have rationalized their MEG capacity (Europe and Japan). In the Middle East, the abundance of competitively priced ethane has provided a significant cost advantage for regional ethylene and ethylene derivative manufacturers, creating the foundation for the most cost-competitive MEG production in the world. In Northeast Asia—particularly mainland China—the development of the textile industry, as well as the growing dominance of polyester fibers within the textile fibers mix, has driven the construction of large-scale MEG plants. Together, the Middle East and Northeast Asia have accounted for more than 85% of the MEG capacity additions over the last 15 years.

A recent game changer in the MEG producing landscape has been the gradual emergence of the newer coal-to-MEG (CTM) routes. These technologies have been developed in mainland China, where the country is capitalizing on the abundance of its coal resources to produce chemicals. Nevertheless, the operating rates of the CTM plants are still relatively low, as these units are struggling with issues of process reliability.

As with all other petrochemicals, the EG industry is cyclical, with the equilibrium between supply and demand determining the state of the industry. In times of large concomitant new capacity commissioning, operating rates generally decline (typically below 85%) and margins shrink because of increased competition among producers. As margins remain under pressure, no new capacity additions are undertaken. As demand gradually catches up with production, operating rates firm up and margins expand (during peak conditions, operating rates typically go above 86–87%). This is when the next wave of capacity is generally planned.

IHS Markit’s Chemical Economics Handbook – Ethylene Glycols is the comprehensive and trusted guide for anyone seeking information on this industry. This latest report details global and regional information, including

IHS Markit’s Chemical Economics Handbook – Ethylene Glycols has been compiled using primary interviews with key suppliers and organizations, and leading representatives from the industry in combination with IHS Markit’s unparalleled access to upstream and downstream market intelligence and expert insights into industry dynamics, trade, and economics.