Ethylene dichloride (EDC) is used primarily for the production of vinyl chloride monomer (VCM), which is used mainly in the polymerization manufacture of polyvinyl chloride (PVC). PVC is commonly used in pipes, fittings, profiles, tubes, windows, doors, sidings, wire, cable, film, sheet, and flooring. The vinyls industries include construction and infrastructure, agriculture, electrical products, and healthcare. EDC is also used as an intermediate in the manufacture of chlorinated solvents and ethyleneamines, and as a solvent in the textile, metal cleaning, and adhesive industries.

Northeast Asia is the largest EDC producing and consuming region worldwide, led predominantly by mainland China. North America is now the second-largest producer and consumer, but the United States remains the single-largest producer and consumer of EDC in the world. The United States is also the largest EDC exporter, as a result of advantaged production economics and healthy demand for caustic soda. Given Northeast Asia ‘s higher energy and feedstock costs, the region remains the largest importer of EDC. 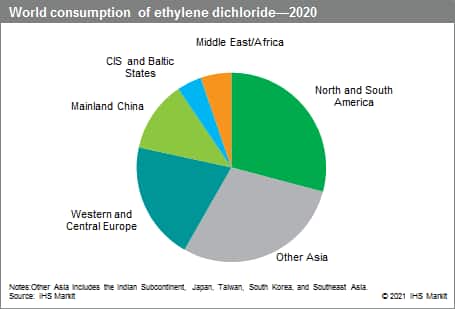 Westlake, Occidental Chemical (Oxy), Formosa Group, Shin-Etsu, and INEOS are the top five EDC producers in the world, together accounting for about 40% of the total global EDC capacity in 2020.

EDC trade flows will remain significant (trade accounted for about 6% of global production/consumption in 2020), given the differences in cost positions among the various regions. Regions with lower ethane-based production costs like the United States and the Middle East are the primary sources of EDC, while the main recipients include the Indian Subcontinent, Southeast Asia, and mainland China.

In 2020, over 98% of global EDC consumption was used for VCM production. Western Europe, mainland China, and the United States have the most significant EDC consumption into non-VCM uses, primarily for chlorinated solvents, ethyleneamines, and vinylidene chloride.

IHS Markit’s Chemical Economics Handbook – Ethylene Dichloride is the comprehensive and trusted guide for anyone seeking information on this industry. This latest report details global and regional information, including

IHS Markit’s Chemical Economics Handbook – Ethylene Dichloride has been compiled using primary interviews with key suppliers and organizations, and leading representatives from the industry in combination with IHS Markit’s unparalleled access to upstream and downstream market intelligence and expert insights into industry dynamics, trade, and economics.