Worldwide ethanolamines capacity increased moderately during 2012–17, but the rate of capacity additions is forecast to slow during the next five years (2017–22).

China added a wave of new capacity during 2012–17, and continues to expand capacity to reduce its reliance on imports and satisfy its growing demand for ethanolamines.

The most significant capacity start-up is that of Sadara Chemical’s plant in Saudi Arabia in 2017. Sadara Chemical is the 50/50 joint venture between Saudi Aramco and The Dow Chemical Company. As a result, trade volumes from the Middle East will rise significantly by 2022. With Saudi Kayan’s new production facility that started up in the second quarter of 2012, the Middle East has become a significant exporter to the global ethanolamines market. 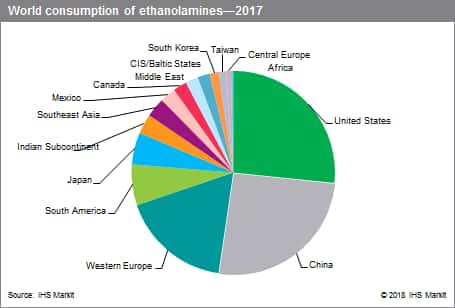 Ethanolamines correspond to a class of organic compounds that include monoethanolamine (MEA), diethanolamine (DEA), and triethanolamine (TEA). Ethanolamines are used in a wide range of applications, including acid gas purification, surfactants for soaps and detergents, and corrosion inhibitors.

The markets with the most growth potential for ethanolamines will be herbicides (for DEA), ethyleneamines and triazines (for MEA), and ester quats (for TEA). Most applications are mature. MEA consumption for triazines has a promising outlook, as opposed to its consumption in wood preservatives, which has declined but is sustainable. MEA triazines are used in the removal of acid gases such as H2S from natural gas, refinery streams, and olefins cracker products, and present an expanding market for ethanolamines.

DEA is increasingly used in the production of diethanolisopropanolamine (DEIPA), which is a relatively new product that is forecast to have a good future.

The Western European ethanolamine industry is going through a difficult period—volatile and high ethylene prices have reduced producers’ margins to levels that are not sustainable over a long period of time, export opportunities have been reduced (as several world-scale units have been brought onstream recently, especially in Asia and the Middle East), and imports could increase in the future (following the start-up of new facilities that enjoy low-cost raw material, e.g., in the Middle East). In light of these developments, there could be some consolidation in Western Europe in the foreseeable future.

Chinese ethanolamine consumption has increased significantly since the mid-1990s. Ethanolamines are consumed primarily in the production of surfactants, pesticides, pharmaceuticals, metalworking fluid and antifreeze additives, gas purification, and other applications. Surfactants are currently the single-largest end use for ethanolamines.

In recent years, new ethyleneamine plants, which use MEA as a raw material, have been constructed as downstream plants for ethylene oxide. Accordingly, demand for ethyleneamine production will increase significantly over the next five years. Overall ethanolamine consumption in China is expected to increase very strongly through 2022.

Overall, world ethanolamine consumption is forecast to increase strongly during 2017–22, driven by consumption in China.