Consumption of ethanol as a fuel accounted for 85–90% of total global consumption in 2017. The dramatic growth in ethanol consumption as a fuel has been driven by political, economic, and social agendas that have sought to 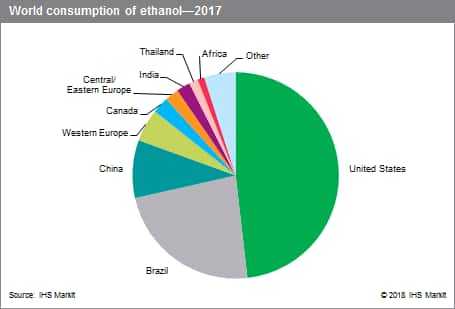 Hydrous ethanol can be used as a direct replacement for gasoline in specially designed vehicles such as flex-fuel vehicles or blended with gasoline as anhydrous ethanol at various levels depending on local mandates. The majority of modern vehicles are able to run on blends of up to 10% ethanol (E-10) without any engine modifications. Ethanol may also be used to produce the fuel ether, ethyl tertiary-butyl ether (ETBE), which is added to gasoline as an oxygenate and octane improver.

Ethanol consumption has surged over the last 20 years, driven by the demand for ethanol as a motor fuel. Brazil’s fuel ethanol industry began in the 1970s, utilizing its vast indigenous sugar-based feedstocks, and was well established before the dramatic rise in US consumption during the late 1990s and the following decade. By comparison, the ethanol fuel industry in Europe, Asia, and the rest of the world is still in its infancy.

In the United States, the ethanol industry was helped by the gasoline demand turnaround, as the low oil prices since late 2014 have boosted gasoline consumption. The majority of ethanol is blended at 10% into gasoline. Ethanol consumption and capacity expanded from 2014 to 2017 after several years of no growth. Corn-based ethanol consumption reached the Environmental Protection Agency’s (EPA’s) goal of 15 billion gallons, but the development of cellulosic ethanol is falling behind. Large-scale cellulosic ethanol projects have had a difficult time starting commercial production because of high production costs, especially after the oil price decline.

In Brazil, the ethanol industry is going through a period of consolidation with a limited number of new plants coming onstream. Brazilian ethanol producers are able to balance the supply of sugar or ethanol depending on the economics of each market and the particular harvest in any given year. The fuel market is heavily distorted by the government’s cap on gasoline prices, which has resulted in declining hydrous ethanol consumption for the nation’s dominant fleet of flex-fuel vehicles.

In Europe, the latest proposals to amend the Renewable Energy Directive—capping conventional production techniques and considering indirect land-use change in the calculation of GHG emission savings—have left the industry and member states with a strong headwind in meeting 2020 targets as second-generation fuel technologies have proved challenging.

The Chinese government sees huge growth potential, and announced ambitious plans in 2017 to expand the use of ethanol gasoline for vehicles to promote the environmentally friendly fuel, as well as consume surplus grain. The introduction of the E-10 mandate will be met by a phase of new ethanol facilities utilizing feedstocks from coal-based acetic acid, corn, sorghum stalk, and cassava. Several fuel ethanol projects are under constriction.

Overall, the global ethanol market is forecast to grow at a much more modest rate of about 2% per year over the next five years. Growth rates could be significantly higher, but would require a commitment from governments, industry, and consumers generally toward the increased use of biofuels through mandates and incentives. In addition, any changes to legislation surrounding the use of diesel fuel could reignite demand for gasoline. In Europe, proposed changes to the taxation of fuels to account for energy content and CO2 emissions could benefit gasoline at the expense of the dominant diesel market. In the longer term, advanced fuels provide exciting alternatives to conventional ethanol production. However, these will not provide major contributions over the next five years, leaving the conventional ethanol industry with a difficult climate, especially in light of recent declines in crude oil prices and tightening national budgets.