Epoxy surface coatings are among the most widely used industrial finishes, exceeded in volume only by alkyds and acrylics. Epoxies are often more expensive than other coatings, but provide superior adhesion, flexibility, and corrosion resistance when applied to metallic substrates. Most epoxy surface coatings tend to chalk or discolor upon exposure to sunlight, so they are seldom used for architectural surfaces that are exposed to outdoor light. Use of epoxy coatings in relatively mature markets (e.g., marine and industrial maintenance, containers, transportation) will grow slowly through 2026. Powder coatings are projected to grow moderately at 2–3% per year in the developed world, but strong growth in less industrialized regions is expected to continue, such as about 5% in mainland China and 3–5% annually in other developing nations. Consumption in metal beverage and food container coatings will decline somewhat because of stagnant demand for metal packaging, as well as concerns over bisphenol A (BPA) leaching into can contents; BPA is a suspected endocrine disrupter. As a result, most manufacturers of canned food are switching to non-BPA linings, and some have established timetables for replacement with more acceptable substitutes. 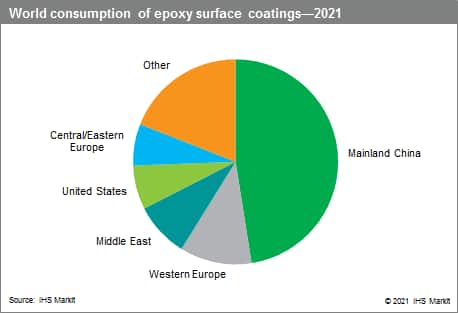 Consumption of epoxy resins for coatings has been growing rapidly in mainland China, with demand expected to continue to grow at 4.2% annually through 2026. Use in powder coatings accounts for about 35% of total consumption. Mainland China is now the leading producer of powder coatings in the world. Marine and maintenance coatings account for another 32%. Use will continue to grow in shipbuilding and repair, as well as in protective coatings for structures used in petrochemical plants, pulp and paper mills, and other areas subjected to corrosive environments. Mainland China has aggressively added epoxy resin facilities in the past decade, with total capacity growing at an average rate of almost 11% per year from 2004 to 2020.

In Western Europe, consumption of epoxy surface coatings is expected to grow approximately 2% per year on average from 2021 through 2026. Powder coatings and marine/maintenance coatings are the largest markets, but both are expected to experience little growth. The transportation sector is expected to grow at about 2% per year during 2021–26. As in North America, there is concern in Europe over leaching of BPA into the contents of cans coated with epoxies. As a result, producers are offering epoxies with very low levels of leachables, and are developing nonepoxy coatings as replacements.

Consumption of epoxy surface coatings has been growing in the Middle East because of demand for maintenance and marine coatings, as well as for powder coatings for oil and gas pipelines.

Another sizeable consumer of epoxy surface coatings is South Korea, where about 42% of the epoxy coatings are used for shipbuilding and repair in the marine industry. South Korea was the second-largest shipbuilder in recent years, surpassed only by mainland China. Only moderate growth is expected in the near future because of increased competition with Chinese shipyards. Total epoxy resin consumption for coatings should grow at only 2–3% annually for the next five years.

Other Asia, which includes mainly India, Taiwan, and the ASEAN countries, is a large and growing market for epoxy coatings. India accounts for more than half of the consumption in the region, and nearly 40% of the Indian market is for epoxy powder coatings. Indian production of automobiles is expected to grow at a rate of 8% annually through 2026. Consumption of epoxy coatings for shipbuilding and repair predominates in Singapore, Vietnam, Malaysia, and Indonesia. Consumption growth in the region is expected to continue at 2.6% per year through the forecast period.

Global consumption of epoxy surface coatings is forecast to grow at an average rate of 3.4% per year during 2021–26.

IHS Markit’s Chemical Economics Handbook – Epoxy Surface Coatings is the comprehensive and trusted guide for anyone seeking information on this industry. This latest report details global and regional information, including