Over the past decade, the epichlorohydrin and epoxy resins industries have suffered from low profitability, mainly because of an excessive buildup of capacity in China. China now accounts for about 50% of global nameplate capacity, although it is believed that a number of plants are running at reduced operating rates. In the last decade, there has also been some buildup in biorenewable, glycerin-based epichlorohydrin capacity, but these plants are operating at low rates because of the drop in petrochemical-based epichlorohydrin prices in the last five to six years. 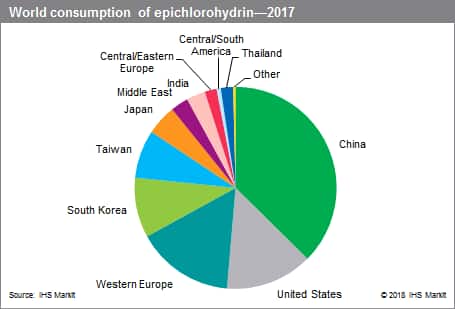 In their cured form, epoxy resins possess outstanding properties, including toughness, resistance to moisture and chemicals, high tensile strength, and good dielectric properties. They are used in a variety of applications. Protective coatings are the largest market in the United States, accounting for over half of US consumption; other large markets for unmodified epoxy resins include bonding and adhesives; glass fiber–reinforced vessels, pipes, and structural materials; and electrical laminates and encapsulations.

China has been the world’s largest epichlorohydrin-consuming country since the late 2000s; in China, epichlorohydrin is used primarily for the production of epoxy resins, accounting for approximately 97% of total epichlorohydrin consumption. Chinese consumption is forecast to grow by 4.5% per year during 2016–21.

US epichlorohydrin consumption fell in 2009 as a result of the economic recession, but experienced good recovery in 2010–12. Consumption fell again in 2012 because of increased competition from Asian producers. In 2015–17, there was some recovery as demand for epoxy resins improved. In recent years, demand for nonepoxy derivatives has generally grown at higher rates than that for epoxies.

Total Western European consumption of epichlorohydrin declined in 2013, primarily because of decreased epoxy resins production; however, consumption growth is expected to resume as a result of greater automotive production and other end uses such as composites applications and increase at an average annual rate of 3.5% from 2016 to 2021.

Epichlorohydrin is made from allyl chloride, which in turn is derived from propylene and chlorine/caustic soda. In the past decade, several plants have been built to produce epichlorohydrin from renewable sources—specifically from glycerin derived as a by-product from the manufacture of biodiesel. However, it is believed these plants are either inoperative or operating at low rates as a result of poor economics. Since 2011, the prices of petrochemical-based epichlorohydrin have fallen because of global overcapacity, a sluggish epoxy resin industry, and the drop in crude oil prices.

Global consumption of epichlorohydrin is expected to grow at an average annual rate of about 4%.