Dyes are used primarily in textiles and paper. In the past 30 years, the production of dyes in the United States, Western Europe, and Japan has decreased significantly, while production in Asian countries, particularly in mainland China, India, and South Korea, has increased. Many of the changes in the dyestuffs industry began in about 1990 as a result of fierce price competition and the globalization of world trade, especially textile manufacture. In the last 30 years, dye production has moved closer to the point of consumption. Mainland China has become the major textile producer, accounting for nearly 55% of total global fiber consumption and now accounts for 40–45% of world dyes consumption. Mainland China and India are also major exporters of dyes, as well as large quantities of important raw material and dye intermediate chemicals, which are subsequently modified for use in Western countries. The Western countries are no longer producing commoditized textiles and dyes, but instead emphasizing value-added products. 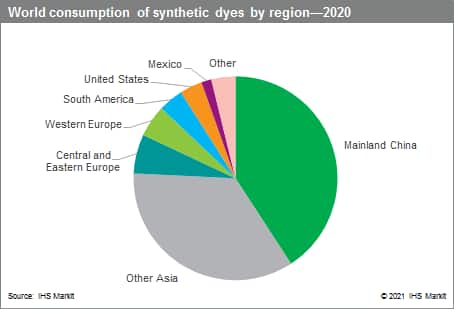 Consumption of textiles depends directly on population growth and private (consumer) spending levels. Global population growth has been decreasing for the last few decades and is now about 1% annually. Per-capita spending has been rising as the standards of living continue to increase in the developing world. An important short-term consumption factor is changes in fashion, which dictate the types of colors used. The quantity of dyestuffs consumed per volume of textile is considerably higher when bright or dark colors are desired in textiles than when only light colors are in demand. Hence, the colors used for textiles have an impact on the total consumption of dyestuffs. While coping with these factors, dye manufacturers seek to offer dyes with properties that aid the dyer in energy savings, reductions in pollution, water savings, greater efficiency in dye and chemical usage, increased productivity through simpler and safer processes, and safer dye products. Producers of dyes are developing inkjet formulations for digital printing for textiles, and sales volumes are expected to grow but from a very low base.

In the United States, use of dyes is generally limited to carpets, automotive, military applications, and specialty uses like odor-control fabrics and fabrics for fire and other protective clothing. Europe has become the leader in digital printing of textiles where designs are printed on fabrics by a printer that is controlled by software.

It is likely that consumption of dyes will grow at lower rates in mainland China because of rising labor costs and environmental concerns, which are forcing many dyeing operations to curtail production. Consumption of dyes is likely to continue to increase significantly in Pakistan, Vietnam, and Bangladesh. Pakistan is already one of the largest producers of denim in the world, with large demand for indigo vat dyes. In recent years, mainland China has been increasing exports of filament and yarn, which are further processed in other countries. Cotton production has been rising in Pakistan, India, and countries of the former Soviet Union.

In recent years, the dyestuff industry has been facing a number of challenges:

The future growth of the dyes business is projected to be around 3.3% per year, as the world recovers from the COVID-19 pandemic.

IHS Markit’s Chemical Economics Handbook –Dyes is the comprehensive and trusted guide for anyone seeking information on this industry. This latest report details global and regional information, including

IHS Markit’s Chemical Economics Handbook –Dyes has been compiled using primary interviews with key suppliers and organizations, and leading representatives from the industry in combination with IHS Markit’s unparalleled access to upstream and downstream market intelligence and expert insights into industry dynamics, trade, and economics.