Terephthalic acid (TPA) and dimethyl terephthalate (DMT) are consumed primarily to produce linear, saturated polyester resins, fibers, and films by reaction with glycols. Nearly all worldwide consumption of TPA and DMT is for the production of intermediate polyethylene terephthalate (PET) polymer. PET polymer, also referred to as reactor-grade polyester or PET melt-phase resin, is consumed primarily in the production of polyester fibers, polyester film, and solid-state (bottle-grade) resins. PET engineering resins are produced not only from melt-phase PET, but also from recycled postconsumer and postindustrial materials 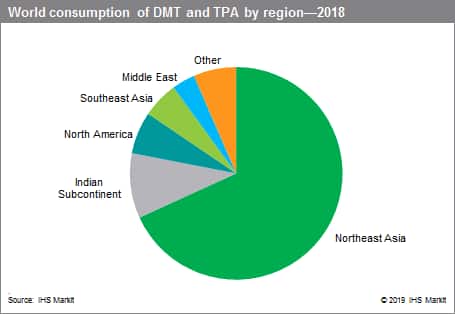 Asia is the largest consumer of TPA/DMT, although consumption is almost entirely TPA (Japan, South Korea, and China consume a small amount of DMT). Asia will account for the vast majority of the world’s TPA/DMT consumption growth in the next five years

During 2008–18, consumption of TPA grew strongly at nearly 6% per year. For the next five years, global TPA consumption is expected slow only slightly. The DMT market, on the other hand, has been on a declining trend. During 2018–18, the DMT market contracted robustly; however, as most of the shift from DMT to TPA has already taken place in the industry, consumption of DMT is expected to continue decreasing, but at much slower rate.

There is interest in recycling PET, especially when virgin polymer prices are relatively high. The portion of PET that is recycled is high compared with most other resins. Most recycled PET is utilized as waste polymer for reprocessing, but processes have also been developed to chemically regenerate monomers or oligomers. The impetus for development of these processes is the assumption that chemical intermediates would find acceptability in a broader range of higher-valueadded applications. Although there is significant capacity for regeneration, the amount of PET reprocessed is much smaller than the amount that is recycled as resin.