Diisocyanates and polyisocyanates are reactive intermediates characterized by terminal isocyanate groups, which typically are reacted with the hydroxyl groups of polyol coreactants to form polyurethanes.

The most widely used diisocyanates and polyisocyanates are aromatic in their composition. A product mixture of polymethylenepolyphenylene isocyanate (also called polymeric MDI or PMDI) and p,pʹ-methylene diphenyl diisocyanate (MDI) is derived from aniline (via benzene). Toluene diisocyanate (TDI, also called tolylenediisocyanate) is derived from toluene. The global MDI and TDI markets are very large-volume and provide important raw materials for the manufacture of polyurethane products; however, the marketplace is very concentrated and large volumes result in an active worldwide trade for MDI and TDI. As a result of the rapid growth of the MDI market, especially in the production of polyurethane foam insulation and oriented strandboard (OSB) wood composites for construction markets, the MDI market is three to four times the size of the TDI market. TDI is consumed primarily in flexible polyurethane foams used in cushioning products such as mattresses, furniture, and automotive seats. The global TDI and MDI markets are forecast to grow at rates of 3–4% during the next five years. 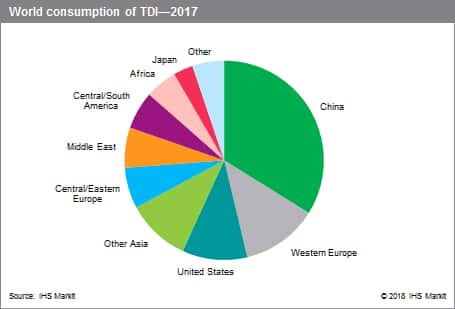 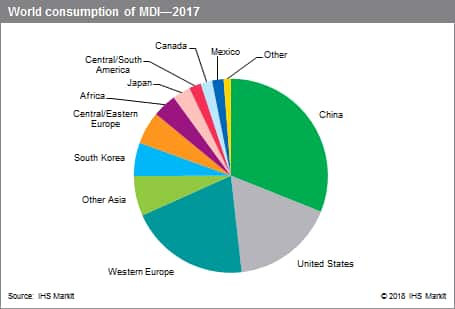 As global demand for MDI and TDI has slowed in recent years, some of the major producers have shut down older facilities (sometimes in conjunction with the addition of new plant capacity and/or opening plants with improved manufacturing processes) and increased export volumes to the faster-growing regions of the world such as Asia Pacific, South America, and Central and Eastern Europe. In addition, most major producers have a worldwide presence—production facilities and/or joint ventures in North America, Europe, China, Japan, and other regions. The most important global market is China, accounting for 34% of the global TDI market, 31% of the MDI market, and 28% of the world’s aliphatic and specialty diisocyanates market.

The TDI, MDI, and aliphatic and specialty diisocyanates industry is very concentrated, with the five largest producers controlling 84% of global capacity.

The diisocyanates and polyisocyanates industry includes a variety of products, some of which are commodity chemicals like TDI and MDI and others of which are specialties—pure MDI and aliphatic and specialty diisocyanates. For the TDI and MDI industries, the high degree of market concentration is due to sophisticated technologies, uncertain availability of raw materials including aniline and chlorine, and high capital cost barriers. There continues to be consolidation in the market.

Strong growth for polyurethane and its raw materials—MDI, TDI, and aliphatic diisocyanates (as well as polyether and polyester polyols)—is driven by several important trends; probably the most important is the drive toward improved energy efficiency and the use of rigid polyurethane foam insulation including laminate boardstock for building roofs and walls; spray rigid polyurethane foam for walls, roofs, and industrial applications; and pour-in-place systems for refrigerators and freezers, and metal panels. A market that is driving construction and PMDI consumption is the use of a wood binder in oriented strandboard (OSB) and other wood composites. Another market that is driving growth is in the automotive industry, with the move toward lighter vehicles (known as lightweighting), in seating, acoustic insulation, and polyurethane adhesives (instead of rivets).

The development of efficient gas-phase TDI technology and improved MDI manufacturing processes and the start-up of world-scale Middle Eastern TDI and MDI plants will lead to the continued shutdown of old and/or small production facilities around the world.

TDI, MDI, and aliphatic diisocyanate markets are expanding and China is now the largest consumer of MDI and TDI. Markets will continue to expand in developing countries in Asia, especially India and Southeast Asia.