Cyclopentadiene and its dimer, dicyclopentadiene (DCPD), are obtained as by-products of the steam cracking of hydrocarbons. Production and consumption had been concentrated in the United States, Western Europe, and Japan, but the rise of Chinese demand in traditional dicyclopentadiene markets has made China the second-largest consumer. Especially in Asia, the growth of the construction, automotive, and electronics industries has increased the consumption of dicyclopentadiene. Growth in DCPD consumption for hydrocarbon resins has launched Singapore and Taiwan as major Asian consumers. 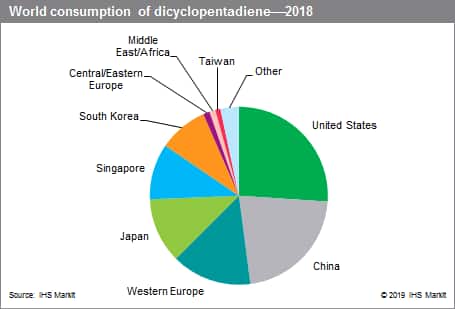 Important factors influencing the global DCPD market are the following: (1) the shift of global production centers to China and Other Asia; (2) the effect of changing feedstocks for ethylene production, especially in the United States; (3) changing trade flows (especially shipments from China and Taiwan to North America and Europe); and (4) the dramatic Asian growth for hydrocarbon resins.

In 2018, the United States, China, Western Europe, and Japan are the largest consuming regions, followed closely by Singapore and South Korea. Global consumption is forecast to continue growing moderately during 2018–23; most enduse markets are expected to grow at GDP levels. Strong drivers for market growth are the hydrocarbon resin expansions in China, Singapore, and Taiwan and continued steady growth in unsaturated polyester resins. Hydrocarbon resins are widely consumed in hot-melt adhesives used for diapers and other nonwovens, packaging, and woodworking. World DCPD consumption will grow fastest in Singapore and Taiwan during 2018–23.

Chinese consumption of DCPD will continue to grow strongly during 2018–23, followed by the United States and Europe. Consumption in Taiwan will experience rapid growth during the forecast period, mainly because of a new DCPD resin plant coming onstream in 2019.