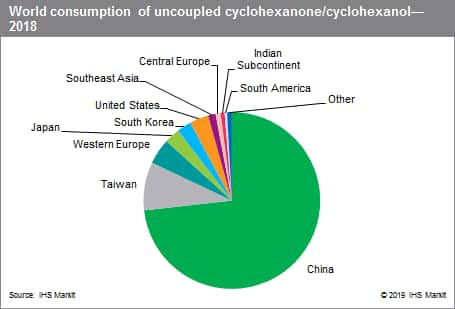 The expansive growth of nylon products in Northeast Asia is the driving factor for cyclohexanol/cyclohexanone consumption in the world. China continues to expand, while Japan and Taiwan are not expected to add or reduce capacity for KA oil in the region. South Korea has no domestic production of uncoupled cyclohexanol/cyclohexanone and imports from Japan and Taiwan. Moreover, cyclohexene as a feedstock is relatively more cost0competitive compared with cyclohexane as a feedstock and, thus, there is a rising trend among caprolactam producers to use cyclohexene as feedstock.

Strong caprolactam demand abroad shifted China into a net export position for cyclohexanol/cylcohexanone in 2011. In 2017:, China shifted to a net import position to help satisfy demand. In the next five years, China will likely remain a small net importer.