Over the past five years, most regions experienced flat or declining demand for cyclohexane, but China has been the epicenter for demand growth. China’s capacity has increased significantly in recent years, propelled primarily by growth in caprolactam demand as a result of nylon 6 growth. The global market for cyclohexane is oversupplied at present and this is expected to continue through the forecast period with capacity additions in China. 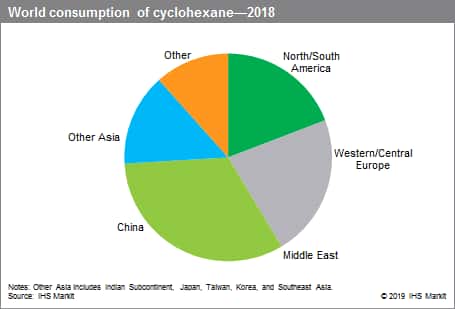 Caprolactam production is the main outlet for cyclohexane consumption, and by 2023, around 45% of the total will be used in this application. Adipic acid, driven by the nylon 66 market, is forecast to account for about 22% of the cyclohexane demand in 2023.

New capacity for caprolactam is mainly cyclohexene-based, especially in China. This has affected the overall global demand for cyclohexane, which is expected to slow in the next few years. The United States, Western Europe, Japan, and China are the only consumers of cyclohexane for adipic acid.

All US cyclohexane producers are integrated into or situated near refineries for access to raw material benzene through extraction of the aromatics stream from catalytic reformate and relatively low-cost hydrogen, which is coproduced in the catalytic reforming process. Production can be limited in cases when the refinery is short of feedstock hydrogen.

Production in the United States is tied to the caprolactam and adipic acid end-use markets. Fluctuations in these markets have a direct impact on cyclohexane supply.

This report provides customers with detailed insight into the global market, key drivers and major players in this important industry, and looks at how the industry will evolve over the next five years.

For more detailed information, please see the table of contents shown below.