This report presents an overview of the global supply and demand for both crude oil (crude petroleum) and refined petroleum products manufactured at refineries. Crude oil is primarily transformed into fuels, most of which are consumed in transportation applications, including gasoline, distillates (diesel/gas oil), residual fuel oil, jet fuel, kerosene, naphtha, and a wide spectrum of other products.

Despite the advent of greener technologies (biofuels, hybrid engines, electric engines, wind turbines, solar cells), the global need for crude oil is still growing. Crude oil constitutes the single-largest source of energy in the world, accounting for 33% of global energy demand in 2017. Incremental crude oil volumes are still required to meet the growing demand for transportation, heating, electricity generation, and petrochemical production in emerging regions. The transportation sector will continue to be the main application for crude oil consumption, with four of the largest-volume refined products (distillate, gasoline, fuel oil, and jet fuel) used predominately for fueling vehicles, planes, ships, etc. Over the next five years, overall demand for these transportation fuels is expected to grow at an average annual rate of 1.0%, primarily to meet the increasing need in non-OECD countries, where light-duty fleet vehicle usage is growing. 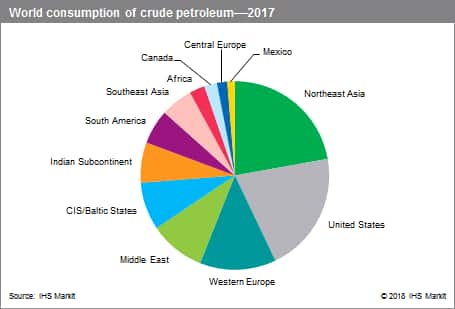 In 2014, OPEC’s decision to increase crude oil production, coupled with the rapidly increasing production of shale oil in the United States and oil sands in Canada and the global weakening in demand, led to a sharp drop in crude oil prices. Since then, the market has remained broadly oversupplied. The low crude oil price environment has prompted the delay or cancellation of many exploration projects worldwide, and forced oil and gas companies into restructuring plans in the face of the sudden drop in upstream profits. Downstream refinery operators have benefitted financially from the drop in crude oil prices on a short-term basis. Long-term refining margins are expected to begin a slow and steady decline as global product demand slows from the impacts of transportation gains and alternative fuel use.

The crude oil supply/demand balance is predicted to show a sharp move from glut to deficit by 2022. During that time, non-OPEC supply is expected to continue to grow, particularly in Canada.

Regional oil production is disproportionate to regional oil reserves. The United States, with slightly more than 2% of world reserves, produced over 11% of the world’s oil in 2017, while Saudi Arabia, with an estimated 16.1% of world proved reserves, produced only 13.1% of the world’s oil in 2017. The major growth regions for crude oil production over the next few years should be North America, led by Canada and the United States; the CIS and Baltic States, led by Kazakhstan and Russia; and the Middle East, led by Saudi Arabia, Iran, and Iraq. Development in nonconventional oil production—tight oil in the United States and oil sands in Canada—will continue to grow over the next ten years.

The tight oil revolution is only recently transforming North American liquids and natural gas production. Like shale gas, tight oil holds the potential to transform the development of liquids supplies.

The success of shale gas produced a glut of supply, causing gas prices to plummet, so operators began to focus attention on oil and liquids-rich gas formations. Within three years, US drilling activity—80% of which had targeted gas during 2008— shifted to 60% targeting oil. The shift has helped to reverse a long decline in US onshore oil production. Tight oil formations are most often associated with the United States, but these types of oil-bearing formations are increasingly being discovered in other world regions, in particular Russia. Many other regions that have tight oil formations are restricted by availability of water to help with the fracturing of the shale deposits.

New crude oil supply will mostly derive from offshore production, with increasing amounts coming from deepwater (1,000–5,000 feet) and ultradeepwater (>5,000 feet) wells, and from shale oil in the United States and oil sands in Canada. North America and Latin America, followed by Africa, will have the most growth from ultradeepwater production, while deepwater supply growth will come from North America, Europe, Asia, and Africa, and to a lesser extent from the CIS. Shallow water production is led by Europe, Asia, the CIS, Latin America, Africa, and North America.

World demand for crude oil will grow at a rate of 1% annually during 2017–22. Most sectors will see growth, except kerosene and residual fuel oil. The transportation sector will continue its increasing demand for oil, even with the introduction of environmentally friendly vehicles and energy alternatives such as gas-to-liquids, ethanol, and biodiesel. As economies in developing regions improve, countries will continue to convert from traditional fuels for residential and commercial use (such as wood burning for heating and cooking) to diesel-fired electricity.

Asia is expected to account for the largest share of crude oil demand growth, followed by the Middle East. Consumption of refined products in OECD countries will show minor growth or declines.