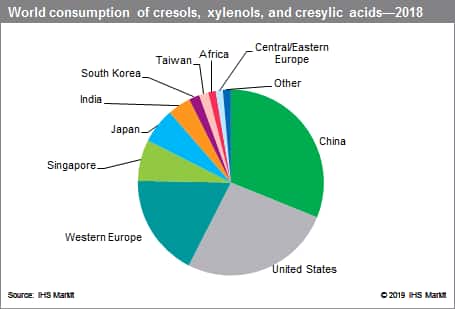 The largest all-around producer of cresylics is Sasol Phenolics (the former Merichem, a 1977 50/50 joint venture between Merichem of the United States and Sasol of South Africa). Sasol has large coal gasification facilities in South Africa that supply Sasol Phenolics with raw cresylics.

The largest world producer of xylenols (mainly 2,6-xylenol) is SABIC Innovative Plastics with its production of 2,6-xylenol used to produce PPE (polyphenylene ether). Production units were located in the United States and the Netherlands; however, production in the Netherlands ceased at the end of 2013 when the company decided to shut down its PPO (polyphenylene oxide) asset in Bergen op Zoom and transfer the business to its US site in Selkirk, New York. This plant is scheduled to restart by the end of 2019, resulting in increased production of 2,6-xylenol.

As a whole (cresols, xylenols, and cresylic acids), the annual capacity as of 2018 is sufficient to meet expected growth in world consumption through 2023. The market is continuously consolidating, with consumption shifting to China, India, and other Asian countries (excluding Japan); fast-growing markets in China include BHT, PPE, and wire enamels. Captive consumption continues to play an important role in this market as several companies use part of their cresols captively for the production of antioxidants (such as Sasol and LANXESS) or their xylenols captively for the production of polyphenylene ether (PPE/PPO) resins (such as SABIC and Asahi Kasei).