The following pie chart shows consumption of chlorobenzenes in the major regions in 2021: 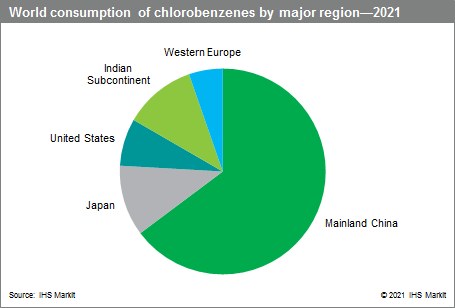 Mononchlorobenzene still accounts for the largest share of chlorobenzene consumption, corresponding to more than half of the global total; however, this share was close to three-quarters in 2016.

Nitrochlorobenzene is the most significant end use for monochlorobenzene, and is consumed as an intermediate in the manufacture of dyes and pigments, rubber-processing chemicals, pesticides, pharmaceuticals, and other organic chemicals.

o-Dichlorobenzene is a chemical intermediate consumed mostly for 3,4-dichloroaniline in the United States, South America, and Western Europe; as an herbicide intermediate in Japan; and for pesticides and pharmaceuticals in mainland China and the Indian Subcontinent.

Worldwide, p-dichlorobenzene is used primarily as a raw material for polyphenylene sulfide (PPS) resins, for deodorant blocks for indoor air, and for moth control. Polyphenylene sulfide resin is a growing highperformance engineering resin that is produced only in the United States, Japan, mainland China, and since mid-2016, South Korea.

Anticipating a global economic recovery to pre-COVID levels in the near future, global chlorobenzene consumption is expected to grow at a healthy rate over the next few years.

IHS Markit’s Chemical Economics Handbook – Chlorobenzenes is the comprehensive and trusted guide for anyone seeking information on this industry. This latest report details global and regional information, including

IHS Markit’s Chemical Economics Handbook – Chlorobenzenes has been compiled using primary interviews with key suppliers and organizations, and leading representatives from the industry in combination with IHS Markit’s unparalleled access to upstream and downstream market intelligence and expert insights into industry dynamics, trade, and economics.