Powder coatings are applied to metal substrates to form highly durable and attractive finishes. They are manufactured and applied without the use of organic solvents; thus, they are highly desirable from an ecological standpoint. The powder coatings industry has endured years of low profitability as the industry increased capacity while demand stagnated in the developed world. Prices have tended to fall as many producers were willing to sell quality powder coatings at low prices. At the same time, users have become more educated and consider many powder coatings to be commodity-like. On the other hand, consumption of powder coatings in less industrialized regions has increased and is expected to continue to increase at a strong rate, with annual growth expected to be about 6–7% in China and 4–5% in other developing nations. There should be some increase in the US market as lower-cost energy supplies will reduce the cost of applying powder coatings, and encourage some end users to relocate their operations from areas with low labor costs.

The profitability of producing powder coatings varies significantly among products, companies, and regions. Barriers to entry are minimal because of the relatively low capital requirements; small producers can compete successfully with larger producers in many markets. The customers for powder coatings are quite diverse. A select few end-use applications require the resources of a large, multinational organization, a notable example being clear coats for automotive bodies. 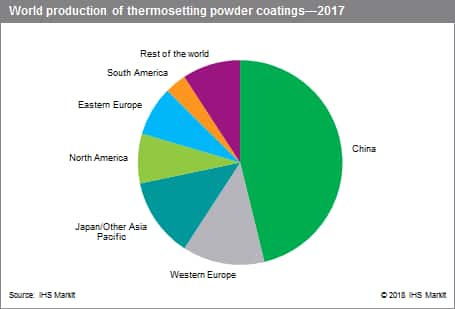 In China, there are over 500 producers, with many being small-scale operations that supply powder coatings for the local market only. If one excludes the Chinese market, there are three large international producers with about 30% of the global market, with the top nine accounting for about 50%.

Powder coatings compete with other finishing technologies (such as waterborne and high-solids coatings) as pollutionabating alternatives to conventional low-solids, organic solvent–based coatings. Powders are especially attractive since they are made and applied without any solvent. However, powder coatings have certain technical limitations and thus will never totally displace other technologies. Powder coatings currently account for 10% of the US industrial coatings market; the penetration of powder coating technology into its niche markets (e.g., metal furniture, appliances, automotive underbody parts) is about 25% on an aggregate basis. In Western Europe, the figures are 18% and 30%, respectively, and in Japan, 6% and 15%. In China, powder coatings account for about 13% of the industrial coatings market.

Some of the more important trends and opportunities foreseen for the powder coatings industry are the following:

As of early 2018, the major issue facing the global powder coatings industry is dealing with much higher raw material costs, which in aggregate rose by 25% in 2017. The prices for two key inputs—epoxy resin and titanium dioxide—rose by 20% and 50%, respectively. There was a substantial negative impact on profitability because of the difficulty in raising prices.

Find the chemical market research and analysis you need

Contact a chemical expert or request a demo today.
Get Started