Cellulose acetate and triacetate fibers are derived from acetylated cellulose. Cellulose acetate is used primarily in the production of cigarette filter tow, which is used in the majority of cigarette filters worldwide. The filter tow helps remove tar and nicotine while maintaining favorable taste to the smoker. It also provides desired hardness/firmness filter mouth feel; a uniform, white appearance at the end of an unlighted cigarette; is readily processed; and is cost-effective. In cellulose acetate textile fibers, the fabrics made provide comfort along with a soft and good drape, and also have pleatability and ease-of-care characteristics. 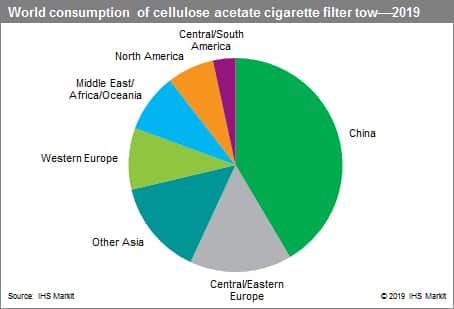 Global acetate tow demand decreased from 2016 to 2019. The decrease is being driven by declining global cigarette use and a declining number of smokers. Health issues caused by smoking, government restrictions on public smoking, increasing taxation, competition from electronic cigarettes, and weaker economies have all contributed to this trend. Cigarette sales have dropped in the last several years in the United States, Western Europe, and Japan. Cigarette production facilities, for example, in Western Europe, have shut down or been relocated. In China, cigarette production has been declining since 2015; however, the government has also been promoting the improvement of the quality of cigarettes, leading to a slight increase in acetate tow consumption.

The overall cellulose acetate fibers market is expected to only slightly grow in the coming years. For cigarette filter tow, the market will remain relatively flat as China will experience only slight growth and declines in demand will continue in North America, Europe, and Japan. The global market has declined in the past few years, which has led to capacity shutdowns or reductions for acetate tow, as well as closures of cigarette production plants. Global cellulose acetate textile fibers demand will experience growth mainly supported by strong growth in China, but only flat or modest growth in most other parts of the world.

Growth for acetate textile fibers will be mainly in China, where new apparel applications and increased exports of finished clothing will lead to increased demand. There will be limited growth elsewhere.

Future filter tow demand growth may come from production of longer filters to reduce tar and increasing filter production in areas where they are currently not used, such as parts of Asia; there is also the possibility of growing existing markets such as targeting female smokers in certain countries. However, acetate filter tow use could be limited with increasing smoking regulations, increased social pressures concerning smoking, as well as increasing competition from electronic cigarettes. For cellulose acetate textile fibers, developing new markets other than apparel or home furnishings could lead to growth opportunities.

IHS Markit’s Chemical Economics Handbook -Cellulose Acetate Fibers is the comprehensive and trusted guide for anyone seeking information on this industry. This latest report details global and regional information, including