Carbon black is a form of carbon generally produced by the incomplete combustion or thermal decomposition of hydrocarbons under controlled conditions. It is used to improve certain properties of the materials to which it is added, primarily as a reinforcement agent, light stabilizer, and black pigment for rubber in tires and other rubber products; as a pigment in coatings, printing inks, and plastics; and for conductive properties in polymers and resins. Production economics are very dependent on the specific feedstock for carbon black manufacturing, which varies widely by region.

The growth of carbon black is closely tied to the automotive industry and the production of tires. With the global automobile industry moving east to China, India, and Central and Eastern Europe, the tire industry has followed, and with it the carbon black producers. (The availability of natural rubber in Southeast Asia is also a factor in the tire industry’s investment pattern.) 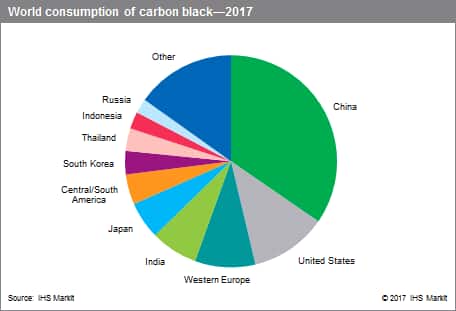 Carbon black consumption in the EMEA region amounted to about 20% of global consumption. Russia is the largest carbon black producer in the EMEA region and globally the third-largest producer behind China and the United States. Russian producers profited from a very good raw materials supply situation in the country and the devaluation of the ruble during 2013–16, which discounted exports into other countries, especially into the European Union. The overall Central and Eastern European markets have benefited from several new tire manufacturing facilities in the last two decades. In the Middle East and Africa, Turkey continues to be the most important market in the region. The market has profited from the desire of the oil producing countries to develop the crude oil business downstream, into petrochemicals, plastics, and elastomers, including new production facilities for rubber, tires, and carbon black in the region.

North American consumption of carbon black accounted for 14% of global consumption in 2016. In 2016, over 75% of consumption was in the automotive industry for tires and other rubber products; the remaining consumption was in other industrial rubber products and nonrubber uses. Consumption growth in North America will average only 1.5–2% during 2016–21; Mexico will have the highest growth in the region and lower growth is expected in Canada. The move to greater shale oil production has led to reduced quantities of quality carbon black feedstocks.

During 2016–21, China and India will account for the largest increases in new carbon black capacity. India is the largest producer of carbon black in Other Asia, followed by South Korea, Thailand, and Indonesia. Total production of these four countries accounted for 94% of the production in the region in 2016. India is also the largest consumer, followed by South Korea, Thailand, and Indonesia. Overall, the consumption growth rate of Other Asia excluding China and Japan will average 4% per year for 2016–21.

Specialty blacks will offer the greatest growth potential, but from a much smaller base, and garner the highest pricing per kilogram of all carbon blacks. Specialty blacks also offer producers protection from the cyclicality of the rubber and automotive industries. Demand for specialty blacks is concentrated primarily in the plastics, ink, and paint industries; use as conductive fillers for batteries is also a growth market in Asia.

Asia, excluding Japan, will be the fastest-growing region in the world, followed by Central and Eastern Europe. China and India, in particular, will have the greatest gains, because of the continued expansion of their motor vehicle and tire industries. However, the growth forecast for China has slowed since the 2013–18 forecast to 4.9% average annual growth for 2016–21.