Calcium chloride is a salt that can be obtained from natural brines as a by-product from synthetic soda ash production, and can be produced from hydrochloric acid and limestone. All three methods are in use, with the synthetic route being used for the largest part of the volume.

Consumption fluctuates significantly from one year to another, with the main consuming area, deicing and dust control, being dependent on weather conditions and subject to strong variations. Consumption also fluctuates in the secondlargest market, which is the use of completion fluids in oil drilling. Consumption in this segment fluctuates significantly on the back of oil prices and the subsequent exploration and drilling activities. On the supply side, not all capacities are equally competitive. 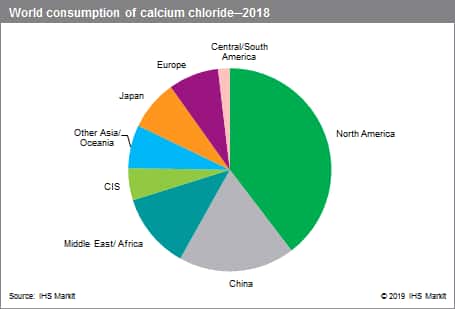 The total consumption of calcium chloride is expected to increase during 2018–23. The large-consumption oil recovery and deicing segments are difficult to predict because of the sensitivity to oil prices and weather conditions. In Europe, the consumption of CaCl2 for deicing is decreasing. The higher price of CaCl2 compared with normal salt is in most cases justified only at very low temperatures. Very-low-temperature periods have been rare in Europe in recent years, and are not expected to occur frequently in the forecast period. Consumption is more important and was high in North America in 2018.

The use of calcium chloride in dust control is expected to grow slowly, not only from its increasing use on unpaved roads and in mining operations, but also from increased use in urban areas, to bind fine dust and maintain levels below the maximum tolerated for fine dust under critical conditions.

The cost of synthetic production differs significantly with the cost of hydrochloric acid. Producers act opportunistically and increase production volumes upon increasing availability and low price of hydrochloric acid. Producers also have to maintain excess capacities to be able to react to consumption peaks in the deicing segment. The product is used mostly in the form of aqueous solution.

The cost of transportation, compared with the product price, makes the solution business regional. However, the market also has a global aspect, with about 25% of the global volumes being traded across regions. The product is traded over larger distances in the form of hydrous CaCl2 flakes or prills, or anhydrous pellets, and then redissolved at the point of use. Because of the dependency on weather conditions and oil price, forecasts are meaningful only as an average over a longer period of time. An underlying growth has been observed on the average for the past few years, and is expected to continue through the forecast period.