Butylenes, also referred to as butenes, are four-carbon mono-olefins that are produced in various hydrocarbon processes, principally catalytic cracking at refineries and steam cracking at olefins plants. These processes yield isomeric mixtures of butene-1, cis- and trans-butene-2, and isobutylene. Butylenes for chemical feedstock are diverted from streams with the appropriate isomer content. Both isomer and purity requirements for chemical production vary depending on the intended application. Derivatives of butylenes range from polygas chemicals and methyl tertiary-butyl ether (MTBE), where crude butylenes streams may be used, to polybutene-1 and linear low-density polyethylene (LLDPE), which require high-purity butene-1.

In 2017, the fuel market accounted for about 81.5% of the total world consumption of butylenes, with chemical usage accounting for about 18.5%. The major fuel application is in the manufacture of gasoline blending components, such as gasoline alkylate and methyl tertiary-butyl ether (MTBE) and ethyl tertiary-butyl ether (ETBE), which are used as octane improvers in fuel applications. 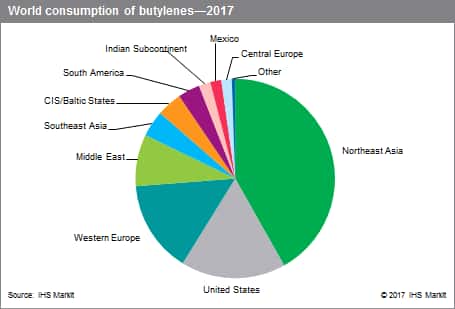 ETBE is used exclusively as an octane improver, while the vast majority of MTBE is used as an octane improver, with the remainder being consumed in the production of high-purity isobutylene. Isobutylene serves as a raw material for MTBE and ETBE, as well as for isooctane. Butylenes may also be blended directly into gasoline for volatility control. They are also marketed with propane and butanes as liquefied petroleum gas (LPG).

Overall consumption of butylenes is forecast to increase moderately during 2017–22, led by chemical usage.

Nearly all MTBE and all of the ETBE produced in the United States is exported to other countries as gasoline octane improvers. In 2017, fuel uses, led by butylene alkylates, accounted for about 87% of total consumption, while chemicals accounted for the remainder. Overall growth is forecast to be moderate during 2017–22.

Western European consumption of butylenes is forecast to decline only slightly during 2017–22. Fuel uses accounted for about 79% and chemical uses for 21% of consumption in 2017.

Japanese consumption of butylenes is expected to increase only slightly during 2017–22. Chemical applications account for about 62% and fuel uses for 38%, led by alkylates.