1,4-Butanediol (BDO) is a bifunctional, primary alcohol that is produced by a variety of methods, mainly from petrochemicals. The major uses are in the production of tetrahydrofuran (THF) (an intermediate of spandex and other performance polymer products) and polybutylene terephthalate (PBT) resins for engineering plastics. It is also used in the manufacture of gamma-butyrolactone and polyurethane elastomers.

China continues to be the world’s largest producer and consumer of BDO and has added the majority of new capacity in recent years. China became the world’s largest BDO producing country at the end of 2015, but the increases led to overcapacity and lower market prices for BDO. The overcapacity of the BDO has eased somewhat since 2015, but the global capacity utilization rate in 2018 remains low at around 60%.The world’s largest producers of BDO include Chang Chun Group/Dairen Chemical Corp., BASF, Xinjiang Tianye, SINOPEC, and Xinjiang Guotai. Together, these companies accounted for about 45% of world BDO capacity as of June 2019. 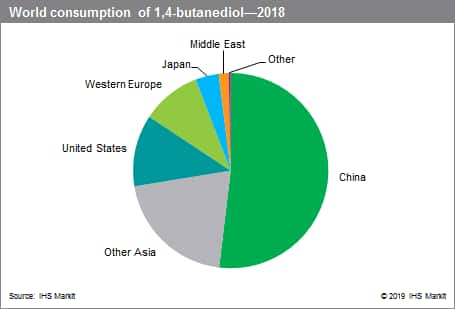 Global BDO consumption is concentrated in China, Other Asia, the United States, and Western Europe, together accounting for more than 90% of the global market in 2018. World consumption is expected to grow at an average rate of about 3–4% annually during the forecast period, and will continue to be driven by the Chinese market.

In China, BDO consumption has increased dramatically with the rapid growth of spandex and PBT production, and these markets will continue to drive global demand over the next five years. Chinese BDO production and consumption increased by 45–50% between 2015 and 2018, while production capacity increased by nearly 30% in the same period. As a result, operating rates in China have improved, and trade volumes have come more into balance.

The pricing trends for 1,4-butanediol basically follow raw material prices, such as for propylene, butadiene, n-butane, or maleic anhydride, which in turn are related to feedstock costs for crude oil, natural gas, or coal. The supply/demand balance also plays a role in pricing; BDO prices were lower in 2015 because of significant world overcapacity, but have gradually increased since then, largely because raw material costs have risen. In addition, as the largest producer, prices set in China can affect prices in other regions/countries.

The 1,4-butanediol industry has attracted significant investment in the development of biosuccinic acid and the production of bio-based BDO that is commercially viable from sustainable sources. Although the first-generation industrial-scale plant has been completed and is in operation, several other projects have been cancelled following financial issues within the companies or shifts in focus from production to research and development. Future prospects for bio-BDO have toned down compared with several years ago, and commercial production remains small.