Benzyl chloride is consumed in the production of benzyl alcohol (accounting for about 52% of total benzyl chloride consumption), benzyl cyanide (14%), benzyl quaternary ammonium compounds (17%), and benzyl phthalates (4%), with the remainder consumed for benzyl esters and other products. Growth in the consumption of benzyl chloride has been driven mainly by increases in China and India. Consumption in China and India will continue to grow the fastest, with expected annual growth rates of about 5.5% and 4.0%, respectively, over the next five years. The market for benzyl chloride is mature in Western Europe and demand will grow at a rate of only 1.5% annually during 2018–23. In North America, benzyl chloride consumption is expected to increase at an average rate of almost 2% per year. Demand in Central and South America is expected to grow at a similar rate, while growth is expected to be relatively stronger in Central and Eastern Europe, and the Middle East and Africa (albeit on a smaller scale). The Japanese market is expected to remain flat. 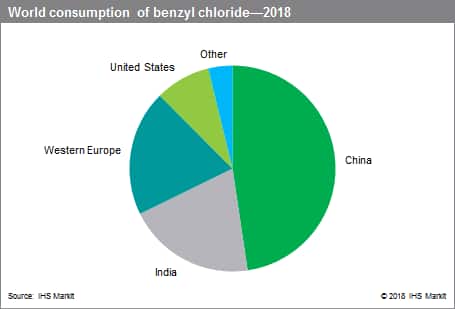 Benzyl chloride use for benzyl quaternary ammonium compounds (benzyl quats) is another major global market. In the United States, benzyl quats are expected to grow as a result of increasing usage in biocides, oil and gas applications, personal care, and other product areas. China will continue to see strong growth in the water treatment and biocides markets. Benzyl quats use in Western Europe will grow because of the water treatment and pharmaceutical industries. Other regions, such as India, Central and South America, Central and Eastern Europe, and the Middle East and Africa, will also be driven by benzyl chloride use in benzyl quats production.

Benzyl chloride for benzyl cyanide production occurs mainly in China. It is expected to have only modest increases. Benzyl cyanide is a precursor to the manufacture of penicillin G; it is also used in minor amounts for pesticides, flavors, and fragrances.

Future demand for benzyl chloride in the manufacture of phthalates is still unclear, as the impact and the scope of regulatory scrutiny are still difficult to evaluate. Stricter regulations are affecting the use of benzyl chloride in this application in Europe, and other regions could follow.

Overall, world consumption of benzyl chloride is expected to grow at an average annual rate of 4% during 2018–23.