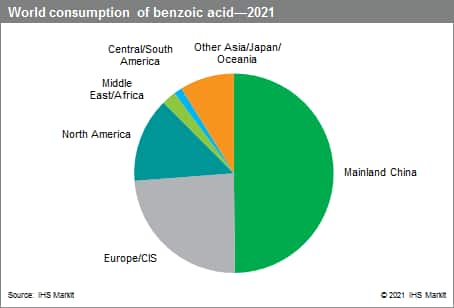 Mainland China, Western Europe, and North America account for the majority of world consumption of benzoic acid in 2021. Sodium and potassium benzoate accounted for most consumption in Asia (where mainland China is the largest world producer and consumer), Europe, and Central and South America.

Global growth prospects for benzoic acid are moderate. Future growth in demand will be driven mostly by the increasing production of sodium and potassium benzoate salts in mainland China and eventually in Europe. The main factors behind this growth are the following:

The third major use of benzoic acid is in the production of alkyd resins, where it can be used both as a building block and as a chain stopper during polymerization. This application, however, is gradually losing its importance in Europe and North America because of environmental regulations concerning VOC emissions. Since the early 2000s, alkyd surface coatings have been replaced with acrylic latexes and, to a lesser degree, with epoxies, urethanes, polyesters, and vinyls in many coating applications. Nonetheless, alkyd resin is still the third most important application in mainland China, and is also the most important end market for benzoic acid in the CIS countries, the Middle East (particularly in Turkey), and South America. Consumption of benzoyl chloride occurs primarily in mainland China, whereas its use as animal feed is concentrated in Europe.

IHS Markit’s Chemical Economics Handbook – Benzoic Acid is the comprehensive and trusted guide for anyone seeking information on this industry. This latest report details global and regional information, including