Benzene is a large-volume commodity petrochemical that is primarily produced in oil refineries and steam crackers, or as a by-product of p-xylene production. The primary chemicals produced from benzene are ethylbenzene, cumene, cyclohexane, and nitrobenzene. Ultimately, benzene is used in a wide range of downstream sectors including construction, automobiles, electronics, and appliances, as well as diverse other durables and consumables. 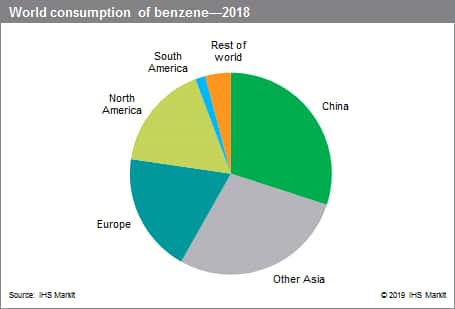 Global consumption of benzene will continue to grow at an average annual growth rate of 2.9% during 2018–23, driven primarily by the developing markets in Asia, particularly China. Benzene consumption and growth will vary by region, based on the development of downstream derivative capacity

Similar to all other petrochemicals, the benzene industry is cyclical, with the equilibrium between supply and demand driving the state of the industry. Overall, benzene consumption is broadly tied to the general economy and has been increasingly linked to emerging countries (China, in particular), where the improvement in living standards is driving an increasing use of a wide range of polymers and chemicals. Chinese demand for these products has been relatively sustained, leading the region and its neighbors (Japan, Taiwan, South Korea) to commission new refineries and steam crackers to feed the growing demand (increasing number of cars, buildings, housings, infrastructure, chemical plants). This situation triggered a local benzene supply glut that has spread globally via increasing trade volumes. Globally, this overcapacity led to low benzene-naphtha spreads, as well as low producer margins.

Benzene production is influenced by many different dynamics that vary from one region to the next. As benzene is produced primarily as a coproduct, its supply is not driven by global benzene demand but rather by the demand for other products (gasoline, ethylene, p-xylene, steel). With a wide variety of potential sources available (refineries, steam crackers, PX units, and coke ovens), the benzene market equilibrium is quite complex and is analyzed in detail in this report.

Over the forecast period and beyond, several trends are projected to alter the course of development of the benzene market globally; changes in mobility solutions, sustainability targets, growing environmental consumer awareness, changing regulations pertaining to the use of plastics in packaging, and increasing recycling activity are all expected to impact benzene consumption in the medium-to-long term. Uncertainties brought about by an escalating trade dispute between the United States and China, as well as economic and security concerns in other regions, have cast a shadow over the global economy.

IHS Markit’s Chemical Economics Handbook –Benzene is the comprehensive and trusted guide for anyone seeking information on this industry. This latest report details global and regional information, including

IHS Markit’s Chemical Economics Handbook –Benzene has been compiled using primary interviews with key suppliers and organizations, and leading representatives from the industry in combination with IHS Markit’s unparalleled access to upstream and downstream market intelligence and expert insights into industry dynamics, trade, and economics.