PEEK is the largest AKP type currently produced, with over a 90% market share. It has been classified primarily into three main types, including unfilled PEEK, carbon-filled PEEK, and glass-filled PEEK. An estimated 20% of PEEK resins are consumed as neat polymer; the remaining 80% is reinforced with mineral fillers, glass fibers, and/or carbon fibers. 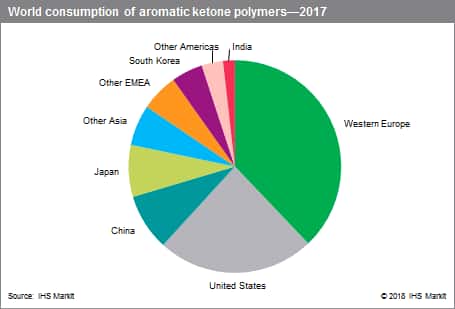 Aromatic ketone polymers exhibit the following characteristics, which are unmatched by other high-performance polymers:

These properties enable AKPs to replace metals in some of the most severe end-use environments, and so justify their higher price, the highest among high-performance polymers. In addition to the performance incentives, AKPs can undergo a variety of production methods (injection molding, extrusion, compression molding, blow molding, wire coating, compounding, etc.) enabling more versatility. Because of their unique set of outstanding properties, AKPs have found increasing uses in many critical applications, and allow complex component fabrication, reduced energy consumption, tolerance to harsh environments, improved reliability and operational lifetime, and a lighterweight material for metal replacement.

On the other hand, AKPs are susceptible to stress-crazing when mechanically stressed and exposed to organic solvents such as acetone, alcohols, or chlorinated solvents. AKPs, like all aromatic polymers, also carbonize and form electrically conductive paths under electrical arcing, a phenomenon known as arc-tracking. Therefore, AKPs should not be used in applications that present any possible exposure to organic solvents or electrical arcing.

The transportation (automotive and aerospace) and electronics segments are the largest consumers of AKPs. In 2017, the transportation and electronics segments together accounted for about two-thirds of world AKP consumption. AKPs benefit the automotive and aerospace industries by providing composite parts and components that are significantly lighter in weight than metals, thus achieving fuel efficiency, reduced CO2 emissions, and reliability improvements that are aligned with consumer and regulatory trends. In electronics, AKPs provide increased functionality and miniaturization opportunities for thermal management, especially in today’s thinner and smaller mobile devices (e.g., smartphones).

AKP consumption in the industrial and medical segments has also grown in recent years. In the industrial segment, the oil and gas sector, chemical process industries, textile machinery, and HVAC (heating, ventilation, and air conditioning) applications account for a significant amount of AKP consumption. AKP-based composite materials (mostly reinforced) withstand increasingly harsh environments (including high pressures, high temperatures, and corrosive elements); they deliver extended performance life, prevent failures, and reduce costly downtime. In medical applications, AKPs, mainly PEEK, continue to be used and promoted in medical implants. Compared with titanium, the best-known implant material, PEEK offers the additional benefits of transparency to X-rays and elasticity similar to that of bone, and thus has become one of the most important thermoplastic material substitutes for implants made of titanium.

The world AKP market is dominated largely by the developed markets of Western Europe and the United States; these two regions combined accounted for more than 60% of the global AKP market share in 2017. Developing regions, such as China and India, have production capacity, but those capacities are geared more to the export market than to promoting domestic growth.

World consumption of AKPs is expected to grow at an average annual rate of 4–5% during 2017–22.