Mainland China, the United States, and Central and South America account for the vast majority (about 84%) of the global consumption of nonprotein nitrogen (NPN) in animal feeds. Although there are many regions with large cattle populations, most of these other regions consume very small quantities of NPN, particularly Mexico and the Middle East and Africa.

Nonprotein nitrogen (NPN) is a term used in animal nutrition that refers collectively to components such as urea, biuret, and ammonium phosphate that are not proteins but can be converted to proteins by microbes in the ruminant stomach.

The exponential growth of the fuel ethanol industry in the United States resulted in a flooded supply of distiller’s dried grains with solubles (DDGS) as a coproduct. The majority of DDGS went to the cattle industry as a cheaper feed supplement option to energy and protein, reducing demand for NPN, which is also a source of crude protein supplement for ruminant animals. However, because corn oil has been qualified as a biodiesel feedstock since 2013, more ethanol plants have installed facilities to extract corn oil from distiller’s grains, thereby reducing the nutritional value of DDGS. In the meantime, growth of the bioethanol industry has plateaued in recent years, which will result in limited growth for DDGS in the future. Feed supplement suppliers have been increasing the NPN content since then. The US cattle population is likely to remain stable at current levels, which will also support NPN demand. 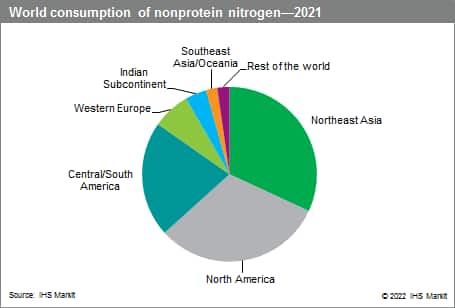 Beef and dairy cattle are the primary consumers of NPN. Beef cattle accounted for 80% and dairy cattle for 20% of urea consumption; calves do not consume urea. Urea is mixed in total mixed rations (TMR) for feedlot and dairy cattle. Urea is also used in forage programs where cattle are on pasture, but also fed liquid feed, cubes, or blocks that contain around 30% protein, nearly half from urea. Most of the growth in the cattle population has occurred in Central and South America over the past 10 years, which has supported NPN demand in the region.

World consumption of DDGS had been growing and is responsible for declining NPN consumption in the last decade. The United States is the largest producer of corn DDGS, but it is also produced in Canada and mainland China. Corn is the primary DDGS in the United States, but in Canada, wheat DDGS is also produced. In mainland China, most of the DDGS sold in the market comes from the production of bioethanol produced from corn. DDGS coproduced from other feedstocks such as cassava, sweet potato, and sweet sorghum bioethanol production is low in protein and is not a desirable livestock feed. Growth of the bioethanol industry has plateaued, and consumption of DDGS has been relatively stable in recent years. The extent of the impact of higher DDGS production and consumption on the NPN market varies around the world and depends on the DDGS feedstock as well as the animal rations market.

In mainland China, NPN consumption in the feed market has matured as growth normalizes. Demand will be driven primarily by the mild growth of Chinese cattle populations over the next few years. Although mainland China also produces DDGS as a coproduct of the corn ethanol industry, DDGS use in the animal feed market is mainly in the duck and aquaculture subsectors.

In the United States, growth in the consumption of NPN in the feed market resumed in 2013 after bottoming out from a continuous decline that began a decade before.

In Central and South America, the Brazilian and Colombian NPN markets experienced the fastest expansion within the region during 2018–21. Brazil will continue to drive regional growth with its increasing cattle population over the next five years.

Globally, NPN feed and fertilizer prices were relatively stable during 2019–20. Since 2021, prices of urea and ammonia have continued to increase. NPN prices remain competitive against natural protein sources such as corn, soybean, and cottonseed.

IHS Markit’s Chemical Economics Handbook – Animal Feeds: Nonprotein Nitrogen (NPN) Supplements is the comprehensive and trusted guide for anyone seeking information on this industry. This latest report details global and regional information, including