Aniline consumption for the production of MDI accounted for 95% of total aniline demand in 2018. MDI is consumed in polyurethane (PU) foam, both rigid and flexible. Most rigid PU foam is used in construction and appliances, while flexible PU foam is used primarily in furniture and transportation. As a result, consumption of nitrobenzene/aniline/MDI largely follows the patterns of the leading world economies and depends heavily on construction/remodeling activity (residential and nonresidential), automotive production, and original equipment manufacture. MDI growth has also been driven by “green” initiatives, sustainability, and the desire to reduce CO2 emissions. Global aniline consumption for MDI production is expected to be the fastest-growing aniline demand segment.

Other applications include use as a chemical intermediate for rubber-processing chemicals, herbicides, dyes, and pigments. Demand for other applications is projected to increase at an average annual rate of 3% over the next five years. Since most MDI producers are captive in aniline and its precursor nitrobenzene, typically in integrated units, nearly all MDI expansions result in increased production and consumption of nitrobenzene/aniline. MDI has been the driving force behind world growth in aniline demand since 1982. Future demand for aniline will continue to depend largely on MDI requirements. 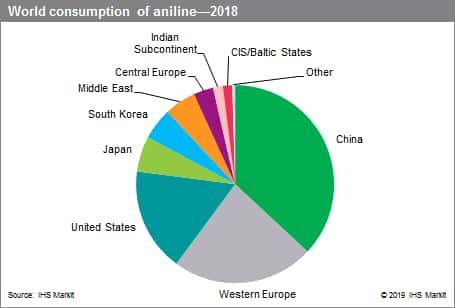 Northeast Asia was the largest producer of aniline during 2013–18, accounting for over half of the world’s aniline production. Western Europe and the United States were the next-largest suppliers. Over the last five years, global operating rates have been fairly low, mainly because of new capacity additions and not enough demand. Global operating rates are expected to remain sluggish, with only a slight average annual increase during the forecast period to 2023. Global production is projected to grow during the forecast period.

The majority of increases in capacity for aniline were in China during 2013–18, along with noteworthy expansions in the Middle East and Western Europe. Global aniline capacity is expected to continue to increase at a rapid pace. In 2018, China accounted for almost 50% of the world’s aniline capacity, followed by Western Europe and the United States.

The top five aniline producers in 2018 included Wanhua Chemical, BASF SE, Covestro, Huntsman Group, and Connell Chemical. Over the next five years, a significant amount of new aniline capacity is anticipated to come onstream from all five major shareholders, along with expansions from Dow, Wanhua Chemical, FJ Pec, Shanghai Tian, and SINOPEC.

China is the major force driving aniline demand. In 2018, China accounted for 37% of global demand and 77% of demand in Northeast Asia. Western Europe is the second-largest consumer of aniline, accounting for 23% of global aniline demand in 2018. Demand for aniline in Western Europe is forecast to grow at an average annual rate of almost 4% over the next five years. The United States follows as the third-largest consumer, accounting for 17% of global aniline consumption. Housing starts, construction, and remodeling activity drive US demand for MDI/aniline. Over the next five years, US aniline demand is forecast to be the fastest-growing worldwide, increasing at an average annual rate of just over 8% during 2018– 23.

China is expected to be the second-fastest-growing region, with an average annual growth rate of about 6.5% over the next five years. The Indian Subcontinent and South Korea will follow during the forecast period with projected growth rates of 4–5%. Additional MDI capacity/production is the predominant factor for increased production and consumption of aniline. Regions that are forecast to see minimal growth will include the Middle East, CIS and Baltic States, and Central Europe. Japan is the only market where aniline consumption is expected to decline during the forecast period.