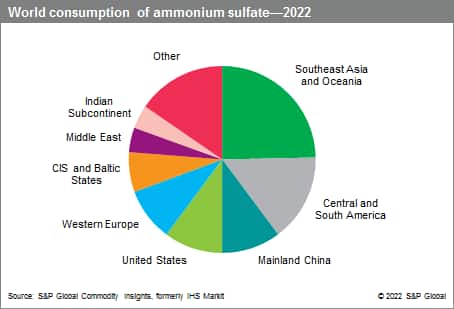 In general, the industrialized regions account for most of the world’s ammonium sulfate capacity, but mainland China has been the largest producer since 2012, followed by the United States and Western Europe. Because much of ammonium sulfate is produced involuntarily as a by-product or coproduct, the volume of production is influenced more by general industrial output levels than by fertilizer demand. As a result, the major capacity growth during 2012–22 occurred in mainland China, and mainland China is projected to account for the major gain during the forecast period, but at a slower rate.

Ammonium sulfate has a high sulfur content in the sulfate form, making it readily absorbable by plants. It has a low pH, making it suitable for alkaline soils. As a nitrogenous fertilizer, it competes with urea, ammonium phosphates, and ammonium nitrate. Sulfur has become increasingly recognized as an essential nutrient for plant growth since it supports the synthesis of amino acids, proteins, enzymes, vitamins, and chlorophyll. It has been found to be beneficial to a variety of crops, including canola, alfalfa, corn, potatoes, rice, vegetables, and wheat.

IHS Markit’s Chemical Economics Handbook – Ammonium Sulfate is the comprehensive and trusted guide for anyone seeking information on this industry. This latest report details global and regional information, including

IHS Markit’s Chemical Economics Handbook – Ammonium Sulfate has been compiled using primary interviews with key suppliers and organizations, and leading representatives from the industry in combination with IHS Markit’s unparalleled access to upstream and downstream market intelligence and expert insights into industry dynamics, trade, and economics.