Ammonium nitrate (AN) is derived from the reaction between ammonia and nitric acid. It contains 33.5–34% nitrogen, of which half is in the nitrate form, which is easily assimilated by plants, and half is in the ammonia form. It is used principally as a nitrogen source in fertilizers and is the main component of most nonmilitary industrial explosives and blasting agents. Fertilizer-grade AN has a slightly higher density than explosive-grade AN. Solid AN (prills or granules) has been the predominant form produced; however, liquid AN has gained popularity, particularly in developed economies, primarily as a component in urea-AN (UAN) solutions.

There is continuous pressure around the world to regulate use and trade of ammonium nitrate because of its potential for misuse as an explosive in terrorism or for accidental detonation. Several countries have banned the sale of ammonium nitrate as a fertilizer, including Afghanistan, China, Colombia, the Philippines, and Turkey. The sale of pure ammonium nitrate has been banned in countries such as Australia, Germany, Ireland, Pakistan, and the United Kingdom, whereas India has reclassified it as an explosive, which has tightened regulations related to handling and storage. This has negatively impacted consumption growth on a global level.

The following pie chart shows world consumption of ammonium nitrates (both AN and CAN): 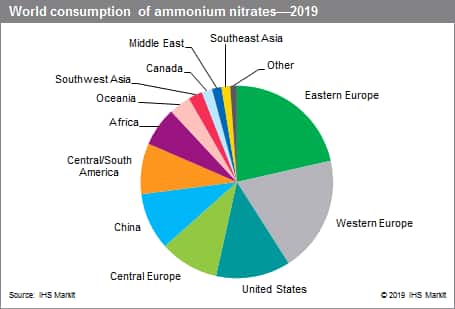 Following its commercial evolution after World War II, AN supply/demand grew steadily for many years and the AN market is now mature. Once the primary nitrogen fertilizer product, ammonium nitrate has lost this position to urea, which has a higher nitrogen content, is more stable, has a lower transportation cost on a nitrogen-content basis, and is often less costly to produce. Ammonium nitrate is expected to continue to lose market share during 2019–24 as more consumers switch to urea or use urea–ammonium nitrate solutions because of their ease of handling and safety. This report reviews the recent history of the ammonium nitrate industry and discusses prospects for its supply and primary markets.

Eastern Europe, Western Europe, and the United States are the leading consumers of ammonium nitrates (AN + CAN). In 2019, these three regions together accounted for about 53% of total world consumption. Consumption is forecast to increase at an average annual rate of 1.0% during 2019–24. Growth in consumption will be driven by Eastern Europe, China, and Central and South America.