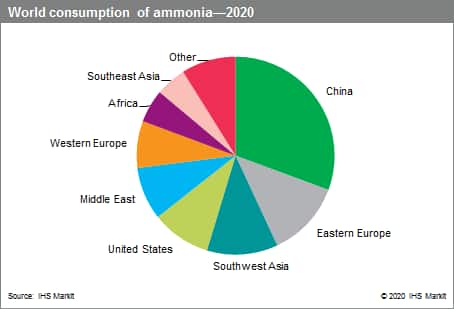 Ammonia is processed into downstream fertilizer products before being applied to the soil. These products include urea, ammonium nitrates, ammonium sulfate, ammonium phosphates, and nitrogen solutions. Consumption of ammonia in industrial applications is projected to grow slightly faster than fertilizer use during the forecast period. Ammonia is used to produce ammonium nitrates that are used to make explosives (covered in the CEH Explosives and Blasting Agents report). It is also used in the production of acrylonitrile for acrylic fibers and plastics, hexamethylenediamine for nylon 66, caprolactam for nylon 6, isocyanates for polyurethanes and hydrazine, and various amines and nitriles.

The global ammonia market had been steady in the recent past until the start of the COVID-19 crisis. There were minimal constraints associated with feedstock natural gas availability in key producing regions. Mainland China experienced a sharp increase in coal prices and faced steeper competition in its urea export market resulting in a drastic decline in ammonia production from 2016 to 2018. However, production increased in 2019 in the Middle East and the United States, with only a minor loss in total global production.

The world has been experiencing weaker nutrient demand in recent years because of poor economic prospects, lower crop and food prices, increasing competition, and fluctuating energy prices. A reduction in fertilizer prices has had a significant impact on fertilizer producers’ earning potential. Although there have been capacity curtailments, consolidation announcements, and cost-cutting measures, fertilizer production and import levels have remained healthy. Because of COVID-19, the demand for ammonia fell drastically in 2020. It was caused by a decrease in the demand for industrial consumers while the agricultural sector experienced a smaller decline, mostly because of logistics and financial issues.

The shares of feedstocks such as naphtha and fuel oil are declining; natural gas is the preferred raw material for newer ammonia plants. During the forecast period, the share of natural gas is expected to increase. However, ammonia plants are expensive; investment costs can exceed $1 billion and plants can take up to three years to build.

During 2020–25, world apparent consumption of ammonia is forecast to increase by about 12.9%. The global ammonia supply/demand balance is expected to move toward a surplus, as future capacity additions will continue to outpace consumption. Ammonia capacity is increasing primarily in areas where the availability and cost of natural gas are lower, in particular, the United States and the Middle East.

IHS Markit’s Chemical Economics Handbook –Ammonia is the comprehensive and trusted guide for anyone seeking information on this industry. This latest report details global and regional information, including

IHS Markit’s Chemical Economics Handbook –Ammonia has been compiled using primary interviews with key suppliers and organizations, and leading representatives from the industry in combination with IHS Markit’s unparalleled access to upstream and downstream market intelligence and expert insights into industry dynamics, trade, and economics.