Growth in demand for C1-C4 alkyl acetates varies by acetate and region. Surface coatings and printing inks account for most of the global C1-C4 alkyl acetates consumption; the exception is methyl acetate, which is used almost exclusively as a chemical intermediate in the manufacture of acetic anhydride. 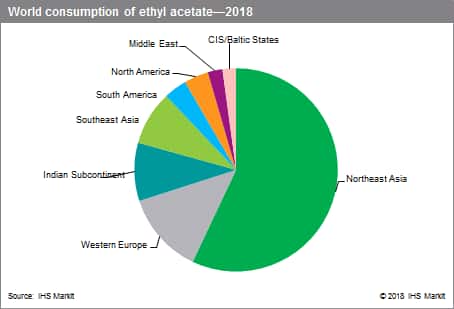 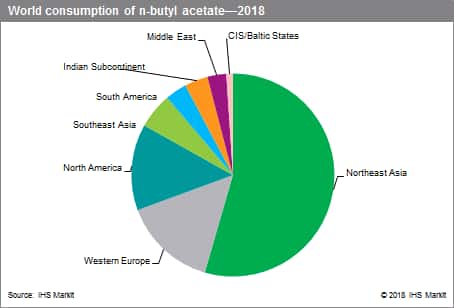 India is a net exporter of ethyl acetate and a net importer of n-butyl acetate. The Indian market continues to grow, as it is expected to have strong growth in domestic consumption and exports during the forecast period.

sec-Butyl acetate is a relatively new end use for acetic acid. China accounts for almost all of the nameplate capacity for this product in 2018. sec-Butyl acetate is used mainly for coatings, pesticides, and gasoline blending in China. This is a growing market in China and most production is consumed domestically.

Total consumption of ethyl acetate in Indonesia has increased steadily in recent years because of continued strong domestic demand for printing inks, paint manufacturing, PVC film, pharmaceuticals, white glue, and other applications. Currently, there are more than 20 manufacturers of printing inks operating in Indonesia. Domestic demand for ethyl acetate in Indonesia is expected to increase continuously through 2023, with an above-average annual growth rate throughout the forecast period.

Southeast Asian consumption of ethyl acetate will continue to grow through 2023, driven mainly by surface coating applications. n-Butyl acetate consumption will grow in the region—albeit representing a smaller market.