Activated carbon is an amorphous form of elemental carbon prepared by the destructive distillation of any one of a variety of carbonaceous raw materials, including wood, coal, or coconut shells. It is used as a substrate primarily to selectively adsorb gases, vapors, or colloidal solids from liquids or gases. The principal commercial product forms of activated carbon are granular, powdered, extruded, and fibers.

The activated carbon business has been and will continue to be driven by environmental regulations—principally regarding water and air purification—especially in the mature and more industrialized areas of the world. Environmental issues will continue to be the predominant force in the markets of rapidly developing countries, particularly mainland China and India. 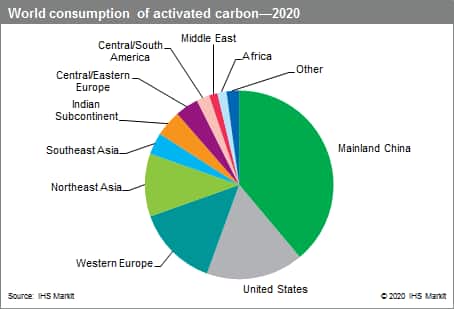 Although the industry has consolidated in recent years by some of the major players, especially in Europe, and more recently in the United States, total world capacity has increased by approximately 500,000 metric tons since 2016. Most of this growth took place in mainland China. A growing trend is the push or recommendation to use reactivated carbon. Reactivation of spent carbon can be a cost-effective alternative to virgin activated carbon production because of reduced disposal costs and a lower CO₂ footprint for reactivated carbon.

US regulations controlling mercury emissions from coal-fired power plants (where compliance had to be completed by April 2016) contributed to the significant consumption of activated carbon during 2012–16. Since that the compliance deadline has passed, consumption has declined in this application, driven by coal plant retirements (and this will likely continue) and lower coal-fired generation. However, there may be some significant growth in the United States from water purification markets, especially if future regulations are passed controlling certain chemicals in drinking water.

On 19 January 2013, a treaty called the Minamata Convention on Mercury was finalized in Geneva; it involved over 140 countries agreeing on a set of legally binding rules to control mercury pollution. The Minamata Convention entered into force in August 2017. As of September 2020, 123 countries have joined the convention. It provides a catalyst to global efforts to reduce and eliminate the use of mercury and mercury compounds. Over the next decades, the implementation of this international agreement will help reduce mercury pollution from the human activities responsible for the most significant mercury releases to the environment.

Developing countries or regions, such as mainland China and the Indian Subcontinent, will have their average annual growth exceeding 6%, while Central and Eastern Europe, the Middle East, Africa, and Southeast Asia will have growth rates of 3–4%. Environmental concerns and/or legislation are driving growth in these regions, especially in mainland China. Water treatment/purification and air and industrial gas purification are contributing to this growth and activated carbon will play a major role. Food processing is also a large contributor to growth, especially in mainland China.

Overall, the forecast global average annual growth rate for activated carbon will be about 4.3% through 2025, driven by the large consuming regions of North America, Western Europe, and mainland China.

IHS Markit’s Chemical Economics Handbook – Activated Carbon is the comprehensive and trusted guide for anyone seeking information on this industry. This latest report details global and regional information, including

IHS Markit’s Chemical Economics Handbook – Activated Carbon has been compiled using primary interviews with key suppliers and organizations, and leading representatives from the industry in combination with IHS Markit’s unparalleled access to upstream and downstream market intelligence and expert insights into industry dynamics, trade, and economics.