Acrylonitrile (ACN) is a commodity petrochemical produced primarily from propylene and ammonia. It is used in the production of a wide range of chemical products (primarily ABS/SAN resins, acrylic fibers, acrylamide, nitrile rubber, adiponitrile, and carbon fibers). The ACN demand pattern is relatively complex because of the diversity of its end uses; however, ACN demand is broadly dependent on the state of the economy. Acrylic fibers, historically the foremost ACN outlet, have gradually lost momentum as a result of competition from low-cost polyester fibers. In the meantime, other applications such as ABS resin or acrylamide have gained significant traction, especially within the emerging world. ABS resins now constitute the largest ACN outlet. 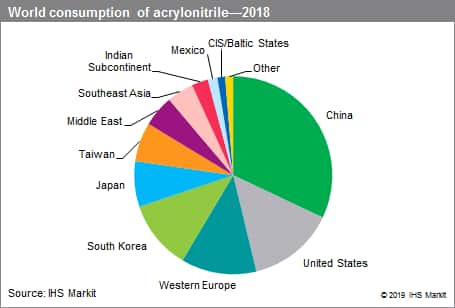 Acrylonitrile demand is dependent on the state of the economy, as was seen during the global recession in 2008–09, when it dropped by 12% in just a year. Most of ACN’s major end-use markets —ABS/SAN resins, acrylic fibers, and adiponitrile — are cyclical and therefore directly affected by economic downturns, especially when consumer spending contracts. Conversely, the acrylamide and nitrile rubber markets have shown more resiliency over the past 10 years. Acrylamides are essentially used to produce polyacrylamides (PAM), which are used primarily in wastewater treatment applications. The nitrile rubber market has been positively influenced by the fast-rising production of nitrile gloves, which are used primarily within the resilient and growing healthcare segment. However, both of these end-use markets are quite small and have not been able to fully offset the overall ACN market decline seen during the last global recession.

Acrylonitrile-butadiene-styrene (ABS) and styrene-acrylonitrile resins (SAN resins) constitute the primary end use for ACN. ABS is the largest-volume thermoplastic engineering resin in the market because of its unique combination of strength, rigidity, heat resistance, and toughness, which make it a prime copolymer for diverse technical and demanding applications. SAN resins are produced by the copolymerization of styrene and acrylonitrile. Most SAN resins have an ACN content of about 30%. SAN can be used for the production of ABS resins; as a result, ABS and SAN resin production capacities are sometimes difficult to segregate. The primary uses for ABS are in the appliance market, where impact and/or heat resistance are often required (kitchen appliances, vacuum cleaners, refrigerators, hair dryers, etc.).

Acrylic fiber is used primarily in the textile industry and is ultimately used to manufacture apparel, home textiles, and carpet flooring. Acrylic fiber once constituted the single-largest outlet for acrylonitrile, accounting for more than half of the market in 2000. However, over the past two decades, acrylic fiber has suffered from intense competition from low-priced polyester fibers, causing demand to gradually decline.

Acrylamide is the world’s third-largest ACN end use. More than 90% of acrylamide is used for production of polyacrylamides (PAM). PAM are organic flocculants and their dominant use is as wastewater treatment agents. PAM are used primarily as conditioning and dewatering aids for sludges, thickening of waste sludge in municipal sewage treatment, and in industrial operations such as in pulp and paper plants. Polyacrylamides are also consumed as flocculants in feedwater treatment for industrial purposes and potable water treatment for municipal usage. Another important application for PAM is in enhanced oil recovery (EOR). EOR is generally used when all conventional extraction methods have become inefficient. It maximizes extraction yields by injecting either a gas (e.g., carbon dioxide or natural gas) or a PAM/water solution.

During 2018–23, demand for acrylonitrile will continue to increase strongly, led by demand for ABS/SAN resins, acylamide, and adipontrile. Demand growth will also be strong in most world regions, led by North America, Northeast Asia, and the Middle East.