Acrylic acid and esters are versatile monomers used as building blocks for thousands of polymer formulations. They are flammable, reactive, volatile liquids based on an alpha-, beta-unsaturated carboxyl structure. Incorporation of varying percentages of acrylate monomers permits the production of many formulations for latex and solution copolymers, copolymer plastics and cross-linkable polymer systems. Their performance characteristics—which impart varying degrees of tackiness, durability, hardness, and glass transition temperatures—promote consumption in many end-use applications. Major markets for the esters include surface coatings, textiles, adhesives, and plastics. Polyacrylic acid or copolymers find applications in superabsorbents, detergents, dispersants, flocculants, and thickeners. Superabsorbent polymers (SAPs) are used primarily in disposable diapers. 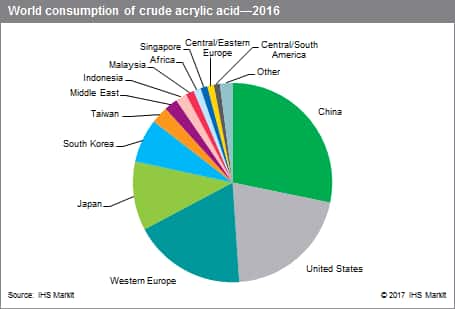 Acrylate esters impart many desirable qualities to polymeric materials, such as color stability and clarity, heat and aging resistance, good weatherability, and low-temperature flexibility. One of the important properties of acrylate esters is their glass transition temperature (Tg), which influences the characteristic temperature at which the resultant polymer undergoes a change from a brittle system to a softer, more flexible one. The Tg has a major influence on the minimum film formation temperature of the coating or adhesive. (The minimum film formation temperature is also influenced by the levels and types of cosolvents and coalescing agents, plasticizers, and other additives added to the polymer or to the coating formulation.) The shorter-chain monomers (e.g., methyl acrylate) produce harder, more brittle polymers, while the longer-chain monomers (e.g., 2-ethylhexyl acrylate) impart softness and flexibility.

Growth in demand for crude acrylic acid is forecast at 4.5% per year during 2016‒21, driven by growth in superabsorbent polymers at 5.5% and acrylate esters at about 4%. SAP growth will be strongest in China and other areas of Asia, but will be much more moderate in the mature regions of North America, Western Europe, and Japan.

SAP is being used in greater quantities as the population in developing nations continues to increase its use of disposable diapers and incontinence products. The SAP growth in Asia is strongly influencing the industry to expand capacity for both crude and glacial acrylic acid, especially in China. Acrylic esters are used principally in coatings and adhesives, which are also areas of growth in developing countries.