Cellulose acetate flake drives demand for acetic anhydride globally, and demand for it is driven in turn by filter tow applications in cigarettes. Demand for cigarette filter tow has been declining in recent years in developed regions like the United States, Western Europe, and Japan as a result of increased government bans and policies on smoking. Electronic cigarettes (e-cigarettes) have also played a pivotal role in causing the decline in cigarette and filter tow consumption. 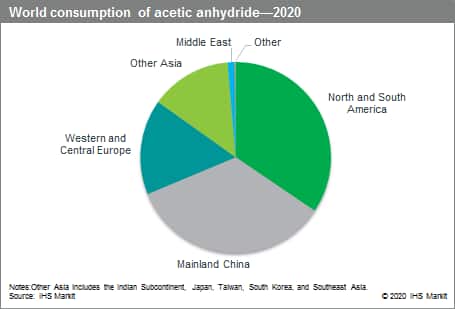 In the United States, growth in demand for acetic anhydride is expected to continue for the next five years (2020–25). Although acetic anhydride use for cellulose acetate flake production will decline further on lower export opportunities to mainland China, increasing growth is expected for pharmaceuticals as well as other applications.

Mainland China will continue as one of the few bright spots for acetic anhydride during 2020–25, although in the last few years, cigarette production and sales have decreased, affecting cellulose acetate consumption. Chinese demand growth is now being driven primarily by the pharmaceutical market, which has increased over the past 10 years and is forecast to continue to increase through 2025. Given the ready availability of acetic anhydride, the country is also expected to diversify into other anhydride markets, including flavors and fragrances, dyes, sweeteners, TAED, and polytetramethylene ether glycol (PTMEG).

In Western Europe, growth in acetic anhydride consumption will continue during 2020–25. As cellulose acetate exports to mainland China will continue to drop and use for cigarette filter tow, acetate fibers, and acetate plastics are also expected to decline, TAED production and pharmaceutical applications are forecast to drive the limited demand growth.

In Japan, acetic anhydride consumption will experience limited growth during the forecast period, mainly because of the decrease in cellulose acetate production. The main driver in Other Asia (excluding Japan and mainland China) will be the pharmaceutical industry as more producers start up in the region, especially in India; there will also be increased use in dyes and pigments.

Overall, world consumption growth for acetic anhydride will be steady for the next five years, led by use in cellulose acetate flake and pharmaceuticals.

IHS Markit’s Chemical Economics Handbook – Acetic Anhydride is the comprehensive and trusted guide for anyone seeking information on this industry. This latest report details global and regional information, including

IHS Markit’s Chemical Economics Handbook – Acetic Anhydride has been compiled using primary interviews with key suppliers and organizations, and leading representatives from the industry in combination with IHS Markit’s unparalleled access to upstream and downstream market intelligence and expert insights into industry dynamics, trade, and economics.