Acetic acid is a commodity chemical produced primarily by the carbonylation of methanol. China accounts for 54% of world capacity, followed distantly by the United States, with 18% of world capacity. No other country accounts for more than 5% of capacity. China dominates production because of its vast coal-derived methanol production, which is the primary raw material for acetic acid.

Vinyl acetate monomer (VAM) is the largest end use for acetic acid, and is used in polymer manufacture for adhesives and coatings. VAM is followed by puriﬁed terephthalic acid (PTA), ethyl acetate, and acetic anhydride. PTA is used primarily for the manufacture of polyethylene terephthalate (PET) solid-state (packaging) resins, ﬁbers, and ﬁlms. Acetic anhydride is used primarily for cellulose ﬂake production, and acetate esters are used mainly as solvents for inks, paints, and coatings. Other uses for acetic acid include monochloroacetic acid, butyl acetates, and ethanol. 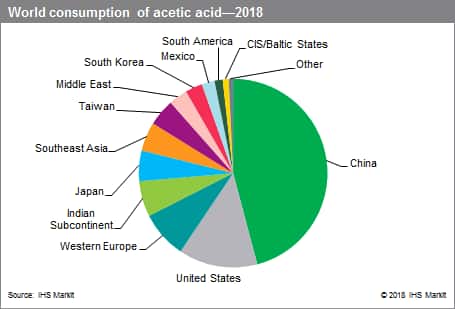 In the United States, the leading application for acetic acid is VAM, followed distantly by acetic anhydride, PTA, and nbutyl acetate. Acetic acid consumption is forecast to continue growing, led by steady consumption for VAM.

As in the United States, the largest end use for acetic acid in Western Europe is VAM, followed by acetic anhydride, ethyl acetate, and monochloroacetic acid and n-butyl acetate. Overall, growth during the forecast period will be strong, led by consumption for VAM.

Demand in most other regions (aside from Canada and Taiwan) is expected to increase during the forecast period, led by demand for VAM and PTA.

Over the coming ﬁve years, acetic acid demand is projected to further expand strongly, driven by incremental demand in developing countries, especially China and India. Vinyl acetate is expected to remain the single-largest outlet for acetic acid on a global basis. China will further enhance its world dominance, and should account for nearly half of global acetic acid consumption by 2023.

BRE Press Publications for the UK

One of the world's largest independent energy exploration/production companies responded to a request from the Government of Mozambique by sponsoring a third-party study of requirements for developing trillions of cubic feet of natural gas as well as the value of related mega-projects for the local economy and people. The study was completed in only 30 days.

This national oil company wanted to give investors confidence so they developed a two-pronged strategy to grow its core oil business and set the stage for launching a new chemical business, while staying abreast of market changes and avoiding up to $4 billion in potential costs/risk to its reputation.