Acetaldehyde is an important chemical intermediate. Pyridines, pentaerythritol, acetic acid, and acetate esters accounted for 34%, 23%, 18%, and 10%, respectively, of 2016 global acetaldehyde consumption. Pyridine and pyridine bases are important raw materials in the production of agricultural chemicals. Pentaerythritol and acetate esters (mainly ethyl acetate, but also some isobutyl acetate) are both used heavily in surface coatings. Acetic acid is now made predominantly via the lower-cost methanol carbonylation process. Other applications for acetaldehyde accounted for the remaining 15% of global acetaldehyde consumption in 2016. This category includes 1,3-butylene glycol, crotonaldehyde, and glyoxal, along with some smaller-volume derivatives.

Acetic acid facilities based on acetaldehyde continue to operate in Western Europe, the Middle East, and South America, although these will eventually be phased out in favor of methanol carbonylation. In addition to these structural changes, acetaldehyde demand has also declined in the last few years because of mature end-use markets and the effects of the economic downturn on these acetaldehyde-derived products. 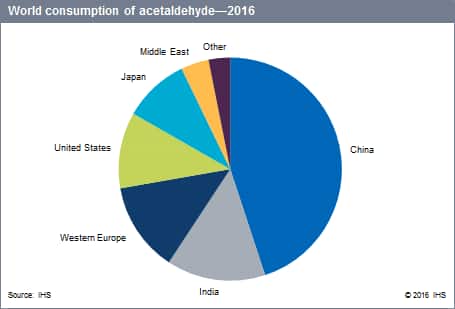 China is the world’s largest consumer of acetaldehyde. In 2016, the country accounted for almost half (45%) of global consumption for acetaldehyde. Chinese consumption for acetic acid (ethanol-based), pyridines, and pentaerythritol is balanced, all accounting for 27–28% of total Chinese consumption. Pyridines and pentaerythritol have developed very rapidly in recent years as a result of significant downstream demand for pesticides, pharmaceuticals, and alkyd resin paints and coatings. Consequently, overall Chinese acetaldehyde consumption is forecast to grow at almost 4% per year through 2021.

Western Europe is the third-largest consumer of acetaldehyde worldwide, accounting for about 13% of world consumption in 2016. The Western European acetaldehyde market is expected to increase only very slightly at about 1.5% per year during 2016–21. The largest end use is pentaerythritol, and this use will account for the most growth, as pentaerythritol use to produce neopolyol esters (NPEs) for lubricants has increased.

Acetaldehyde consumption in Japan should exhibit about 2.5% per year growth through 2021, depending primarily upon growth in the consumption of ethyl acetate.

South America, the CIS and Baltic States, the Middle East, and the rest of Asia are all expected to grow at rates of less than 1% per year through 2021 because of reductions in downstream uses or no production. There has been no consumption of acetaldehyde in Africa since Sasol closed its acetaldehyde and crotonaldehyde plants in 2004–05.

Overall, global consumption of acetaldehyde is forecast to grow at an average annual rate of 3.0%.