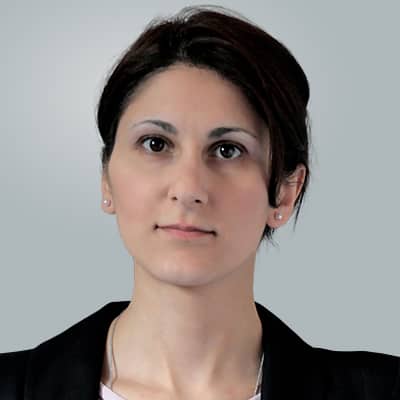 Lilit Gevorgyan is the Russia and CIS principal economist at IHS Markit.
She is responsible for analyzing the political, security, economic and business environment of Russia and the former Soviet republics. She has lived and worked in Armenia, Russia, the Ukraine and US. As a regular contributor to major media outlets, including frequent guest appearances on BBC Radio Four's Today Show and newscasts, she participates in broadcasts by CNN, CNBC and Al Jazeera, among others. She has been quoted in numerous print and online publications. Prior to joining IHS, now IHS Markit, in 2009, Ms. Gevorgyan had gained knowledge of the Commonwealth of Independent States (CIS) risk environment during her time at the Eurasia House at Cambridge University, the International Institute for Strategic Studies, LSE Enterprise and the United Nations. Earlier in her career, she worked for the ministries of foreign affairs and economy in Armenia and she was press relations officer at the Armenian Diplomatic Mission in London. She completed a Diploma from NATO Defense College in Rome, Italy, gaining a focus on conflict resolution. Ms. Gevorgyan's university degrees include a Bachelor of Arts and a Master of Arts in Political Science from Yerevan State University, Armenia, as well as a Master of Science in International Relations and Political Economy from the London School of Economics and Political Science (LSE), United Kingdom.