The German government formed in March following the elections of September 2017 is taking advantage of the very strong state of public finances to loosen fiscal policy. The government remains reticent to make tax cuts, however, enabling it to continue targeting budget surpluses throughout 2018-22 despite plans for higher expenditures (see Table 1). 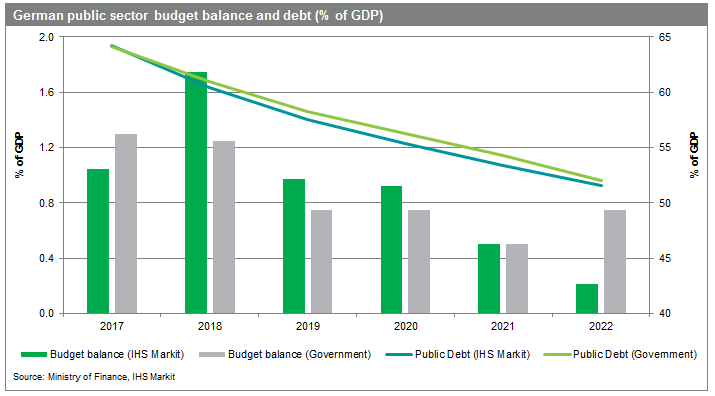 The government's public spending plans allow for more investment while avoiding tax increases - but without planning any significant tax cuts except in 2021. Indeed, despite domestic and foreign criticism, both short- and medium-term public finance plans indicate that Finance Minister Olaf Scholz (SPD) is broadly continuing the fiscally conservative approach of his predecessor Wolfgang Schäuble (CDU). The emphasis is on financial stability in times of robust economic performance rather than risking an overheating economy that boosts inflation or creates an asset price bubble.

Additional public expenditures during the current legislative period 2018-21 plus the year 2022 (also included in medium-term plans) amount to about 1.7% of a single year's GDP, or an annual average of 0.35%. In cumulative terms, 0.6% of GDP will go toward consumption-oriented purposes related to Germany's social welfare system (old-age care, children, long-term unemployed). Budget sections that either have a clear investment focus (transport infrastructure, education, research and development, digital technology, military) or at least a partial one, such as agriculture, housing, regional policies, international development, and humanitarian aid, will receive 0.8% of GDP during 2018-22, and a separate fund to expand/upgrade digital infrastructure will contribute another 0.3%. Note the likely post-Brexit need to enhance Germany's contributions to the EU's next multi-annual financial framework (2021-27) has not been budgeted for yet.

Overall, the proposals result in planned average growth in fixed investment by the public sector of roughly 5% during 2018-21, exceeding the 3.5% average for total spending by territorial authorities. Given that the share of fixed investment in public spending was only 6.1% in 2017, current budget plans will nonetheless only raise this ratio to 6.5% by 2021 - and plans for 2022 only foresee investment growth of 1.5%.

In terms of revenue, the government plans to reduce the contribution rate for unemployment insurance by 0.5 percentage point, to relieve employees by reintroducing the employer/employee equality of contributions to statutory health insurance, and to raise the basic tax allowance (all from January 2019). Finally, they intend to curtail the so-called solidarity tax surcharge (introduced following German reunification) by EUR10 billion in 2021. Cumulatively, these revenue-related measures will lower the tax burden by 1.4% of GDP during 2019-22, or by 0.35% per year on average.

Economic assessment of the government's projections

The government prepared its fiscal projections during the second quarter (see Table 2 for details). Although assumptions for GDP growth in 2018 and 2019 now appear too optimistic by 0.4-0.5 percentage points each, upward revisions to recent GDP levels largely compensate for this. On balance, with official GDP forecasts for 2020-22 averaging 1.4% (similar to latest IHS Markit predictions), the resulting forecast of real GDP growth of 1.8% on average during the period 2016-22 dovetails with our own assessment. By contrast, IHS Markit forecasts of nominal GDP growth are somewhat lower than the government's because we anticipate an average GDP deflator of only about 1.3-1.4% due to a faster increase in import than export prices during 2018-21 (partly related to a weaker euro).

Although the higher average GDP deflator in the government's projections tends to expand the gap between the absolute level of revenues and that of expenditures and therefore boost budget surpluses, this is more than offset in our view by factors such as the delayed formation of a federal government after the September 2017 election and the dearth of spare planning capacity in the bureaucracy that will restrain expenditure growth during 2018-20.

The Ministry of Finance has also assessed the fiscal impulse delivered to public-sector budgets and thus implicitly also economic growth (details see Table 3 below). Overall, the measures for 2018-22 are estimated to deliver a cumulative fiscal impulse of 2.8%, or an annual average of almost 0.6%. As most measures only impact from 2019 onwards, the average for 2019-22 is 0.7%. IHS Markit notes that the new fund for digital infrastructure, not included in the table, will add another 0.07% of GDP per year during 2018-22. The table also uses a narrow definition of public investment, its cumulative impulse at 0.4% of GDP during 2018-22 thus representing only about one-seventh of all fiscal measures (excluding the digital infrastructure fund). The contribution to future GDP growth potential is thus quite small. Nevertheless, when adding the public consumption and tax cut components of the totality of fiscal impulses and assuming a public expenditure multiplier of roughly 0.75, the net boost to demand and therefore GDP growth can initially be put at 0.5% per year during 2019-22.

This preliminary result needs to be qualified, however. Firstly, Länder or local governments frequently do not fully translate extra transfers they receive from the federal government into additional spending. Secondly, the distribution over time is skewed towards later years given the cut in the solidarity tax only in 2021. The projected annual impulse to GDP thus rises from less than 0.4% in 2019-20 to almost 0.7% in 2021-22. Thirdly, the delayed passage of a budget for 2018 has created a negative fiscal impulse this year because the administration was forced to operate on (lower) 2017 spending levels during the first half of 2018. Fourthly, after several years of above-trend GDP growth, the economy is running near fully capacity in 2018, displaying a growing shortage of skilled labor and a lack of spare planning capacity in the bureaucracy that will delay public infrastructure projects. Thus, the fiscal multiplier will be below average during 2019-22, some of the fiscal impulse being lost to the domestic demand deflator. In sum, the fiscal boost to GDP should be closer to 0.3% rather than 0.5% annually.

Germany's grand coalition government for the legislative period 2018-21 has not faced much political pressure for any dramatic about-turn in economic and/or fiscal policy. Nevertheless, budget plans reflect pressures related to the refugee crisis, calls from abroad to help reduce the large current-account surplus by stimulating domestic demand, and the need to take structural measures to cope with challenges related to demographics, transport and IT infrastructure, energy supply, housing, income inequality, education, and R&D.

The new fiscal measures are purportedly aimed at tackling these structural tasks rather than having a cyclical impact. Nevertheless, most measures boost consumption, creating a fiscal stimulus effect on GDP that IHS Markit would put at roughly 0.3% per year during 2019-22. Trade uncertainty additionally restrains near-term investment potential because of protectionist risks to supply chains related to US and UK trade policy.

IHS Markit expects German GDP growth moderation in the coming years due to slowing global growth, Germany's own capacity constraints, and the foreseeable European Central Bank switch into monetary tightening mode. As such, the government's (cautious) shift towards a looser fiscal policy appears well timed, although an even greater emphasis of government measures on investment rather than consumption would have been desirable for long-term growth prospects.

Germany's only gradual shift towards more expansionary fiscal policy supports the country's debt sustainability. Although the high degree of policy continuity may reduce near-term benefits to economic growth and employment, it also reduces the risk of economic overheating and will help in a longer 5-10-year outlook, given the country's ageing demographics and the need to adjust its energy supplies. Nevertheless, the government has also missed an opportunity to support future strong performance through expanded strategic investment.

#Migration from Central America and the Caribbean is on the rise due to climate change. Learn what this might mea… https://t.co/AU75SXwV0P