The growth in digital pay TV came largely from the Asia Pacific region, which accounted for 83% of net additions in 2017. However the region added twice the number of OTT subscriptions than pay TV, driven by an increase in smartphone penetration and improvements in mobile data accessibility and affordability. 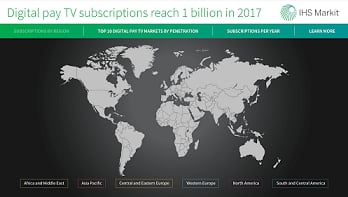 Please fill in the form below to download our interactive world map showing the growth of digital pay TV subscriptions worldwide.